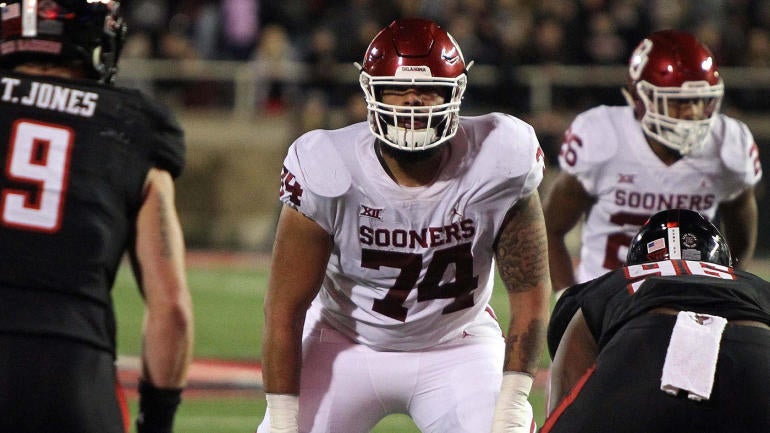 With the No. 38 pick in the 2019 NFL Draft, the Bills traded up to select Cody Ford, offensive lineman out of Oklahoma. Power blocker who creates serious torque with faster-than-you’d-expect leg churn and has great feet for his size which allow him to mirror well. He’s long enough to deal with small speed-rushers but they give him more problems than power rushers. May not have the explosiveness in his kick slide to play on the edge, yet still a fun, punishing offensive line prospect.

Pete Prisco: When I talked to (Bills head coach) Sean McDermott at the combine, one of the things he said is we have to get better around Josh Allen, well, they did. This kid gets them really that much better. This is a heck of a tackle. Nice move by the Buffalo Bills.

Chris Trapasso: During his pre-draft process, some saw Osemele as a tackle. Some saw him as a guard. He played on the edge at Iowa State and began his career with the Ravens at that position. An injury during the playoffs precipitated a move to guard, and the rest is history. Osemele’s explosiveness and mean streak combination allowed him to become the best young guard in football. Ford is a similar tweener, with feet capable enough for him to stay on the outside if need be. I think his best position is guard because of his athleticism and strength blend.

Ryan Wilson: Ford started redshirted as a freshman in 2015 and started three games in 2016 but a fractured fibula ended his season. He played in 12 games in ’17 — including four starts at left guard — and started 14 times last season for the Sooners.

Among all FBS offensive tackles, Taylor ranked fourth in Pro Football Focus‘ pass-blocking-efficiency metric and was successful on run-blocking plays 91.1 percent of the time.

Ryan Wilson: Incredibly athletic for size and has the quickness and footwork to excel in pass protection. Ford can be susceptible to the speed rush but he has lower-body athleticism/upper-body strength to make up for it.

Whatever concerns there may be about Ford, athleticism is not one of them:

Ryan Wilson: Has short arms by NFL offensive tackle standards and he needs to better use his hands. He’s also still learning; after beginning his career at guard he’s still growing into the tackle position.

While Ford doesn’t excel in run blocking like he does in pass protection, he can be ferocious: