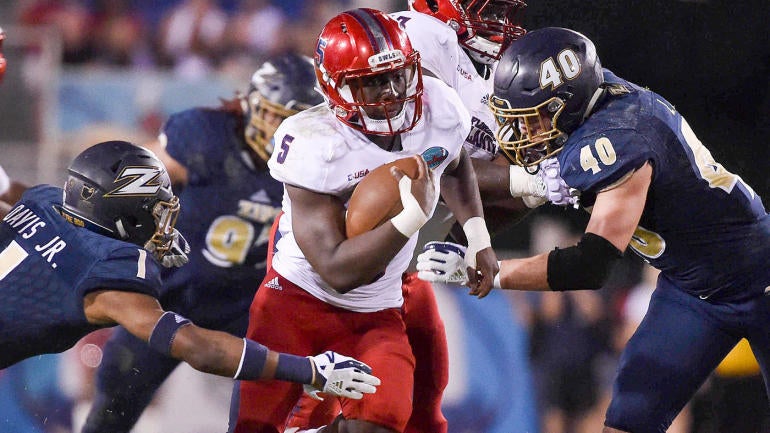 With the No. 74 pick in the 2019 NFL Draft, the Bills selected Devin Singletary, running back out of Florida Atlantic. Light-footed, hard-nosed runner with impressive burst, lateral agility, and vision. Plus balance when absorbing contact or when he has to make a variety of cuts to get through a running lane. At times he’s electric in space and will hit home runs down the field those his timed speed left much to be desired.

Pete Prisco: I know LeSean McCoy is getting older and they’re gonna throw the football to Singletary. Sean McDermott is getting players to make Josh Allen better. The Bills are moving in the right direction.

Dave Richard: Singletary’s nickname is “Motor” but it should be “Creator” because all he does is create yards. Over three years at FAU, he had the uncanny ability to consistently juke defenders, break tackles (113 in 2018 to lead NCAAs), slip out of defenders’ grasps and power through for extra yards — in spite of being just 5-foot-7 and just over 200 pounds. I suspect he’ll spend 2019 in a very limited role behind LeSean McCoy and Frank Gore, two guys who have much to teach this young grasshopper. I’m not sure he’ll ever be a featured back like he was at FAU but when you combine his patient, balanced running with great lateral agility with the crumbcake O-line he had with the Owls, you admire his abilities even more. He’s one to wait on — let’s pass on him in seasonal leagues and hope a middle- to late-round pick in dynasty/keeper start-ups and a top-15 pick in rookie-only drafts pays off in 2020.

Chris Trapasso: It’s easy to remember late-career MJD, when he was more of a bowling ball runner than the spry change-of-pace back to Fred Taylor. However, when MJD came out of UCLA in 2006, he was known as Maurice Drew and was a short, just over 200-pound, lightning-fast, make-you-miss runner. He timed much faster in the 40 than Singletary (4.39 to 4.66), but Singletary is electric in space and plays faster than his timed speed.