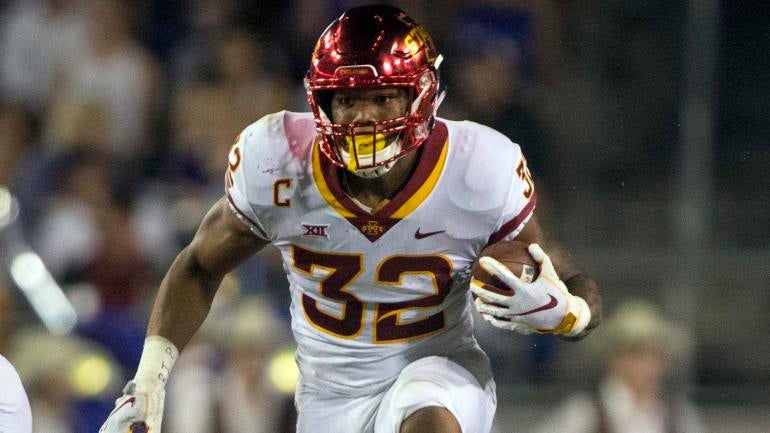 With the No. 73 pick in the 2019 NFL Draft, the Bears traded up to select David Montgomery, running back out of Iowa State. Low center of gravity runner with scary lateral jump-cut skills and the best contact balance of any back in the class. Reliable receiver who instantly morphs into a runner after catching the football and surprises defenders with his quickness after the catch. Best between the tackles carving through the defensive line and second level.

Pete Prisco: I don’t love it, I think he’s a plodder more than anything else. I liked the Henderson pick a few spots earlier a lot more.

Dave Richard: I felt like I was watching Matt Forte when I saw David Montgomery play at Iowa State. Maybe the Bears saw the same thing. Montgomery has a complete skill set to go with nimble feet and good strength and power, but he doesn’t flash a ton of speed. The 222-pounder moves his feet like he weighs 195, creating separation from tacklers with lateral quickness and very good balance to buy some space. He’s also plenty physical, from finishing off runs with a plowing shoulder or stiff-arm to salvaging a run where a hole doesn’t open by burrowing behind his linemen and pushing the pile (he’s very good at the goal line). He’s already got good pass protection technique and more than capable hands in spite of a limited route tree. His Fantasy success is completely tied into his volume — if he’s part of a three-headed monster in Chicago with Tarik Cohen and Mike Davis, we’ll never see him evolve into a superstar. But if given the chance to find 15-plus touches a week, he’ll be a stud. My colleague Heath Cummings loves Montgomery as a top-70 pick in seasonal leagues but I’d pump the brakes on that. Is Round 8 too rich? I don’t think so, especially in PPR. Montgomery will surely go at about that spot in long-term formats and dynasty startups and is a candidate to be a top-five choice in rookie-only drafts.

Chris Trapasso: Neither Conner nor Montgomery will run away from many defensive backs down the field. They destroy ankles at the line of scrimmage and at the second level with efficient jump cuts. Also, when linebackers hit them, they bounce off thanks to elite contact balance. We saw how good of a back Conner can be in 2018 despite not having blazing speed. Montgomery will likely start as a No. 2 but has the modern-day feature back traits to be a No. 1 running back.