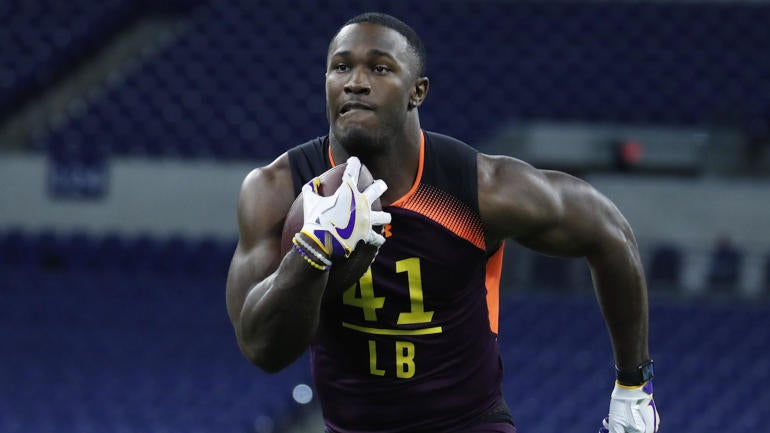 The Raiders are potentially set to make a “surprising” pick at No. 4 overall, and many people believe it could be a quarterback. But what if the big surprise for Oakland isn’t an offensive player, but a shocking defensive player instead. Specifically, a linebacker. Even more specifically, Devin White of LSU.

White is going to hear his name called in the first round on Thursday night’s 2019 NFL Draft (make sure and tune into CBS Sports HQ for wall-to-wall coverage) and he’s going to hear it called early. It would be stunning if he fell out of the top 10 and, I believe, shocking if he got past the Giants at No. 6.

There are three teams who make perfect sense for White, with the Raiders at No. 4, the Buccaneers at No. 5 and New York at No. 6. And White knows it too.

I spoke to him at the Braun Style Lounge in Nashville (they’re helping to style rookies ahead of the draft, White is going with the “smooth as a baby’s bottom” look, he said) for a Pick Six Podcast segment (listen in the player below and make sure to subscribe to get our daily NFL pod delivered to your inbox) and White said that he had a great visit with the Raiders and believes he is in play there.

“I feel like I’m pretty much in play there. Mike Mayock, he spoke very highly of me,” White said. “Paul Guenther, he’s the one who was telling me about the scheme, if you don’t go to the right scheme it can hurt you as a player and that really stood with me because I didn’t understand what he meant. I thought he meant you either play in a 3-4 or a 4-3 but he meant way more than that, [who is coaching you] and how they’re utilizing you.

“I wouldn’t be surprise pick because they’ve got the No. 4 pick, unfortunately, but I won’t be there for their other two picks so it’ll make them take me.”

Adding to White’s own feelings, Charles Davis of NFL Network (where, it’s worth noting, Raiders GM Mike Mayock used to work), said on the pregame draft show that he could see the Raiders going defense and going with White to qualify for that “surprising” move.

It would make a ton of sense, depending on how the first three picks play out. Assuming some combination of Kyler Murray/Nick Bosa/Quinnen Williams/Ed Oliver comes off the board with the first three picks, the Raiders would be facing a choice between drafting a quarterback (Dwayne Haskins), drafting a pass rusher (Josh Allen) or taking a linebacker (White). There are more directions, but those are the primary choices.

White, in Guenther’s scheme, could be dominant as an off-ball linebacker flying all over the place. The Raiders can look at this class and see that there are two good linebackers and a bunch of talented pass rushers. That could sway their decision towards taking White, because they won’t be able to go pass rusher early and linebacker late.