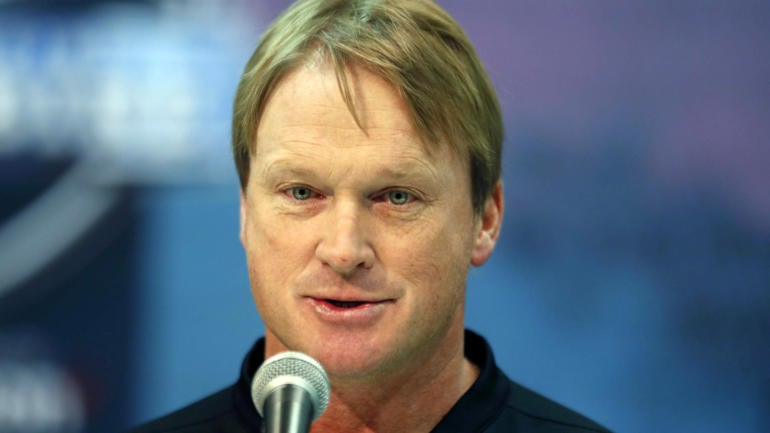 The Oakland Raiders are a mystery shrouded in an enigma when it comes to the draft, the most interesting team by far thanks to their three first-round picks. We know they want/need to take defense, but there is certainly a chance they could take a quarterback with the No. 4 pick instead. There’s even been some buzz they might consider a running back (!) there too.

If they go QB, the logical choice is Kyler Murray, assuming the Cardinals pass on him at No. 1 (this is not a sure thing at all). But don’t count out Dwayne Haskins just yet.

According to Ian Rapoport of NFL Network, the Raiders decided “late this week” to move up Haskins on their 2019 NFL Draft board and could be interested in taking him with the No. 4 overall pick.

The “RUMORS” part of this headline is important: today is the day of the draft and the smoke is never thicker than it is right now. Everyone hears everything. Also worth noting is the Raiders situation right now.

Oakland sent everyone home except for Jon Gruden (head coach, former ESPN employee) and Mike Mayock (GM, former NFL Network employee) and some other high level guys. They did so to eliminate leaks out of the draft room, making it hilarious that there are leaks coming.

But that also narrows down where the leaks are coming from and increases the likelihood that the leaks are coming out on purpose. Haskins draft stock in terms of the betting markets has been all over the place. He was set at 6.5 earlier in the week, before it steamed up to 10.5 (over meaning he goes later, under meaning earlier) and then after rumors of Haskins going to the Redskins in some wild draft day trade popped up on Wednesday, the number came back to 6.5. In other words, no one is entirely sure what’s going to happen with Haskins.

The amount of smoke the last 24 hours actually makes me highly suspicious: suddenly multiple teams are dying to get Haskins either at No. 3 or No. 4? You know what makes more sense than the Raiders suddenly altering their draft board and the position of Haskins in the week before the draft? The Raiders wanting someone to trade up to No. 3 and take Haskins.

If that happens, there’s a chance two of the first three picks in the draft are quarterbacks and the Raiders are in perfect position to get one of their top two choices (presumably Nick Bosa or Quinnen Williams).

So connect the draft dots: Redskins are rumored to want a trade up for a quarterback, potentially Haskins, who has connections to owner Dan Synder. The Raiders then quickly have a lot of interest in Haskins and might take him at No. 4. How convenient! Of course they have interest in him publicly now that they’re eliminating rumors, because it greatly benefits them to have the Redskins trade up.

Step 1) Act like you’re interested in Haskins at No. 4, Step 2) scare Dan Snyder into doing something stupid (trading all his future picks for the No. 3 pick from the Jets to jump the Raiders), Step 3) Profit. It’s pretty simple Draft Day checkers, really.

Now that doesn’t mean the Raiders won’t draft Haskins. They might like him. But they have been very intent on limiting the buzz surrounding potential quarterback draftees because they don’t want to rile up Derek Carr (and/or any of the Carr brothers; there are many of them and they will block you on Twitter, trust me) by creating the perception they are drafting his successor.

But if the Raiders are actually intent on taking Haskins at No. 4 — and that would be perfectly fine — they’re doing themselves a serious disservice by letting it get leaked publicly.