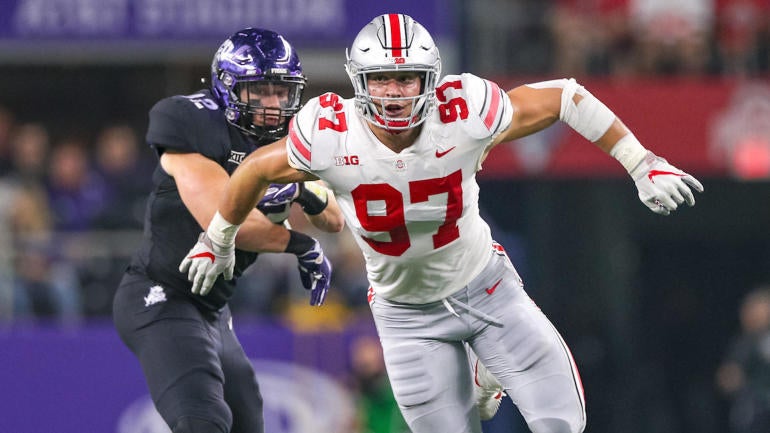 The first round of the 2019 NFL Draft gets underway Thursday night in Nashville. The bright lights of Broadway will be on full display as the action kicks off at 8 p.m. ET. The Arizona Cardinals hold the first pick, but there are still questions about who they’ll select on Thursday. Many have suggested that new head coach Kliff Kingsbury is enthralled with Oklahoma quarterback Kyler Murray and so the Cardinals will draft him first overall. Oddsmakers believe that’s the case as well. In fact, one major book has Murray as a -400 favorite to be the No. 1 pick in the 2019 NFL Draft. You can make NFL Draft props on everything from how many quarterbacks will be drafted in the first round to whether the total number of trades in Round 1 exceeds 6.5. However, knowing where to find value in the 2019 NFL Draft prop bets and which ones to stay away from can be overwhelming. That’s why you want to see the top 2019 NFL Draft picks and predictions from SportsLine’s resident NFL expert, R.J. White.

White finished in the top 1 percent of the Las Vegas SuperContest two seasons ago. It was no fluke, either, as he also cashed big-time in the 2015 SuperContest, the nation’s most prestigious handicapping competition. In addition, if you had placed $100 on each of R.J. White’s NFL picks on SportsLine the last two seasons, you would have won nearly $4,000. In fact, he’s nailed more than 60 percent of his picks both seasons. Smart bettors tail his selections.

Part of his success: White has years of experience analyzing NFL statistics and trends, dating all the way back to Super Bowl XXV. After White emerged as a premier NFL Draft expert, CBS Sports asked him to produce mock drafts starting in 2017. Every spring, he puts together an entire seven-round mock draft that’s read by millions, including trades he expects to go down. No stone is left unturned in White’s production of that inclusive piece.

Last year, one of his top NFL Draft picks was Baker Mayfield going No. 1 overall at 25-1 odds. Those who took his advice were very glad he did. Now, White has examined every 2019 NFL Draft prop bet and locked in his five best bets. He’s sharing them over at SportsLine.

We’ll give one away: Go under 6.5 defensive players taken in the top 10.

The 2019 NFL Draft is expected to be a heavy defensive draft filled with players who can make an instant impact on NFL rosters. Plenty of defensive players are expected to fly off the board, but White believes quarterback-needy teams will jump the gun and select a signal caller early.

“Nick Bosa, Quinnen Williams, Josh Allen, Devin White and Ed Oliver should go in the top 10,” White told SportsLine. “Aside from that, Devin Bush is a sleeper to be a top-10 pick, but the stocks of Rashan Gary and Montez Sweat seem to be taking a hit, and Christian Wilkins and Brian Burns likely aren’t going until the teens. Expect to see three quarterbacks go by No. 10, and then all we need is one more player from Jawaan Taylor, Jonah Williams and one of the tight ends. We should get that, so I’m laying the juice here.”

White has also found worthy plays on several other 2019 NFL Draft props, including the over-under for how many players from Alabama and Clemson will be taken and how many defensive players will go in the top 10. See which props to jump on only at SportsLine.

How many receivers get taken in the top 10? And how many players from Alabama and Clemson will hear their name in the first round?  Visit SportsLine now to see all of R.J. White’s 2019 NFL Draft prop bets, all from the premier NFL handicapper and draft expert who keeps crushing the world’s most prestigious handicapping tournament.