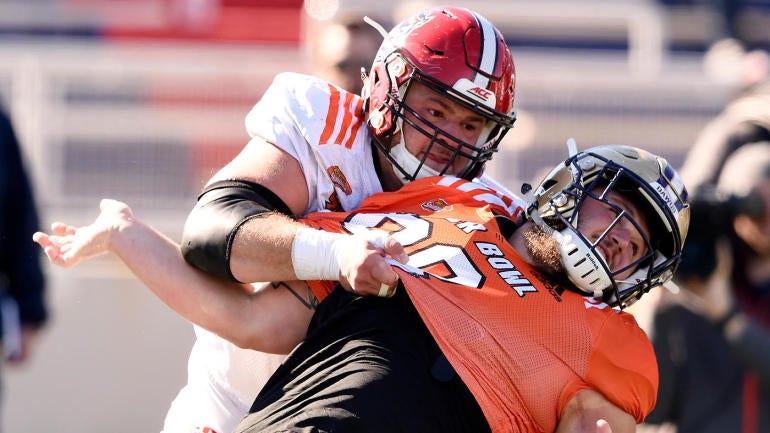 With the No. 18 pick in the 2019 NFL Draft, the Vikings selected Garrett Bradbury, center out of NC State. Bradbury is slender for the center spot and lacks in the power department, both in his hands and his anchor, but has insanely loose hips and flexible ankles which allow him to routinely win the leverage/angle battles on blocks most centers wouldn’t come close to reaching. Tremendous combo blocker who’s lightning quick finding linebackers at the second level. With more weight and strength, Bradbury can be an All-Pro interior blocker because of his athleticism and is the prototypical center you want in a zone-blocking scheme.

Pete Prisco: I like this pick. It’s a B-plus for me. The Vikings couldn’t move anybody off the line of scrimmage last year. Bradbury is very athletic, not a very big kid, but he can move.

Dave Richard: I love the Bradbury pick for the Vikings. They need offensive line help in the worst way and Bradbury offers an instant starter at guard or center in their zone-blocking scheme. This also helps Dalvin Cook, who needs the interior of his line to be better.

Chris Trapasso: Get Bradbury in an NFL strength and conditioning program for a year or two and a zone-blocking scheme … and watch him flourish. He has the loosest hips and quickest feet I’ve ever scouted at the center spot. He’s just a little top heavy right now and doesn’t have the strength or weight to anchor. Like Kelce, Bradbury is ultra-aware of stunts and has the elite lateral mobility to pick up multiple assignments on a given play. He’s tremendous in space on sweeps and screens too.

Ryan Wilson: Bradbury redshirted his freshman season — as a tight end. He moved to offensive line the following season, though he mostly saw action on special teams. As a redshirt sophomore in 2016, he played on 87 percent of the offense’s snaps and that increased to 98 percent in 2017 when Bradbury was a first-team All-ACC selection. He was a consensus All-American in 2018 and won the Remington Award, which is given annually to the best center in college football.

Among all FBS offensive linemen, Taylor ranked 27th in Pro Football Focus‘ pass-blocking-efficiency metric and was successful on run-blocking plays 89.1 percent of the time.

Ryan Wilson: Insane athlete who makes combo blocking look easy. When Bradbury gets his arms on you, it’s over. His ability to get to the second level is unparalleled, as is his quickness, footwork and overall technique.

Bradbury didn’t win every matchup with Christian Wilkins, but when you pancake one of the best defensive linemen in the country, it’s noteworthy:

Ryan Wilson: Bradbury is slightly undersized and can sometimes be controlled by longer-armed or stronger defensive linemen, but it’s a rare occurrence.