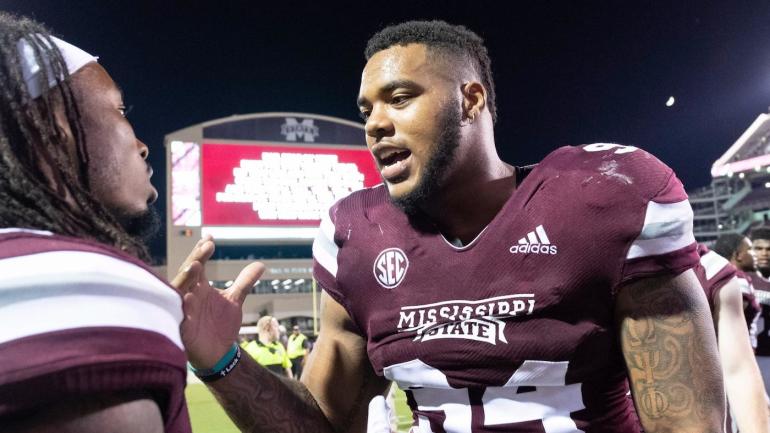 With the No. 19 pick in the 2019 NFL Draft, the Titans selected Jeffery Simmons, defensive tackle out of Mississippi State. Tore ACL before combine, which could drop him out of the first round even though he’s a top-10 talent. Simmons can’t be moved off spot, is strong at point of attack, and has the ability to disengage from blocks to make tackles near the line of scrimmage. Very athletic, tenacious motor and is as effective against the run as the pass. A disruptive backfield presence who is always near the ball.

Pete Prisco: I love this pick. When you look at the tape, the guy who was dominating for Mississippi State was Simmons. He was dominating on the interior. This kid has a chance to be one of the most dominant interior linemen in two years. You could have made a case for getting a weapon for Mariota, but this pick makes a ton of sense. Love, love this pick.

Dave Richard: Jeffery Simmons would have been a top-10 pick if not for tearing his ACL. Powerful and surprisingly nimble for a 300-pound player, Simmons will hopefully be ready to contribute to the Titans defense in late 2019, though it could be for the best if they wait until 2020 for him to come back from his knee injury. He’s not going to be a significant beacon on the Fantasy radar and obviously does nothing to enhance the Titans DST in 2019.

Chris Trapasso: Suh was a squeaky clean defensive tackle prospect, and he legitimately looked like a fifth-year NFL veteran playing against scout team offensive linemen during his entire stay at Nebraska. Simmons isn’t quite as jaw-droppingly strong. He’s in the Suh realm though. He physically overpowered most SEC offensive linemen he faced. His arms generate a ridiculous amount of power, and he can counter off his bull rush very well. Simmons is a plus athlete as well, with a large tackle radius. In short, he has the traits to excel as a pass rusher and as a run stopper. On the field, I think there’s a legitimate argument for him being as good — if not better — than Quinnen Williams.