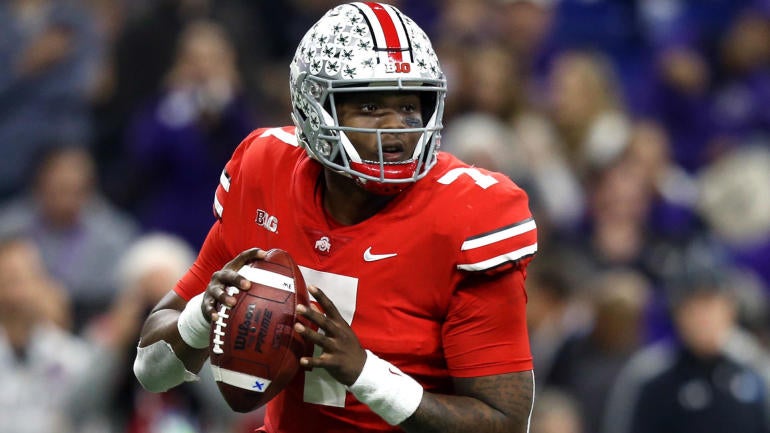 With the No. 15 pick in the 2019 NFL Draft, the Redskins selected Dwayne Haskins, quarterback out of Ohio State. Haskins was dominant during his 2018 season, completing 70 percent of his passes and throwing for 50 touchdowns. He’s the best quarterback in this class, is a traditional dropback passer, and has the arm strength and accuracy to excel at the next level. There are concerns about his experience and mobility but neither prevented him from being one of the first quarterbacks taken on draft day.

Pete Prisco: I think he’s the best quarterback in this draft and it’s a great pick for the Redskins. Getting a cheap quarterback to come in and push to start right away is a great move. Love this pick by the Redskins. Like Kyler Murray he’s a one-year wonder, but there’s a lot of potential here.

Dave Richard: This was the last place I wanted Dwayne Haskins to land in the draft because the Redskins’ receiving corps isn’t that great. So from a Fantasy perspective, this is a bust. No one’s going to draft him to play this year and he’ll be a late pick in long-term formats and a Round 2 pick in rookie-only drafts. However, the guy has potential to be a very nice quarterback for a long time in D.C. He’s a great thrower who sticks in the pocket. Expect Haskins to be a usable Fantasy option once he’s surrounded by some targets.

Chris Trapasso: When I think of “pure” pocket passers — and in this case that comes with a touch of a negative connotation denoting a serious lack of mobility — Drew Bledsoe is one of the first quarterbacks who comes to my mind. Bledsoe was statuesque in the pocket; he just wanted to live there and fire rockets all over the field. Yes, there was an occasional step up away from pressure, but most often Bledsoe either delivered the football from inside the pocket or was hit or sacked inside the pocket. I see a lot of that with Haskins, a slow-footed, pure pocket passer. He’s a little more athletic than Bledsoe was, but Bledsoe had a stronger arm. I wasn’t scouting Bledsoe when he was a prospect in 1993. I was scouting bad guys Power Rangers had to fight. But I do have vivid memories of Bledsoe in the NFL. Haskins can read the entire field, is mostly accurate, and wants to set up shop between the tackles on every snap. If protected well, he can be an awesome quarterback in the NFL. Like with Bledsoe, I’m worried about Haskins when he faces pressure.

Ryan Wilson: Haskins arrived in Columbus after growing up in Maryland by way of New Jersey. He originally committed to the University of Maryland before attending Ohio State, where he redshirted in 2016. He was J.T. Barrett’s backup a season later, going 40 of 57 with four touchdowns and an interception in limited duty.

Haskins won the job ahead of the 2018 season and he was dominant from start to finish. He threw five touchdowns against Oregon State in the opener and led Ohio State to a 7-0 start with 28 touchdowns and just four interceptions. And after the lone loss to Purdue, the Buckeyes won their final six games. Haskins was magnificent in the final three — Michigan, Northwestern in the conference championship and Washington in the Rose Bowl — tossing 14 touchdowns with just one interception.

Ryan Wilson: At 6-foot-3 and 231 pounds, Haskins fits the mold of a traditional pocket passer. Throws with great accuracy and confidence, has a strong arm, and can throw from various arm angles. Moves well in the pocket, and while he’s not a running quarterback, can create throwing lanes and while still throwing with precision, and can also gain yards with his feet.

Ryan Wilson: Only has one year of experience and probably isn’t ready to start immediately at the NFL level. He also played out of the shotgun at Ohio State, and while that isn’t disqualifying, some NFL teams want their quarterbacks to be able to play under center too. Haskins also wasn’t asked to throw many deep passes — he ranked 37th among all FBS quarterbacks in average depth of target (9.7 yards), according to PFF — and he needs to become more consistent with his footwork, which should come with experience.