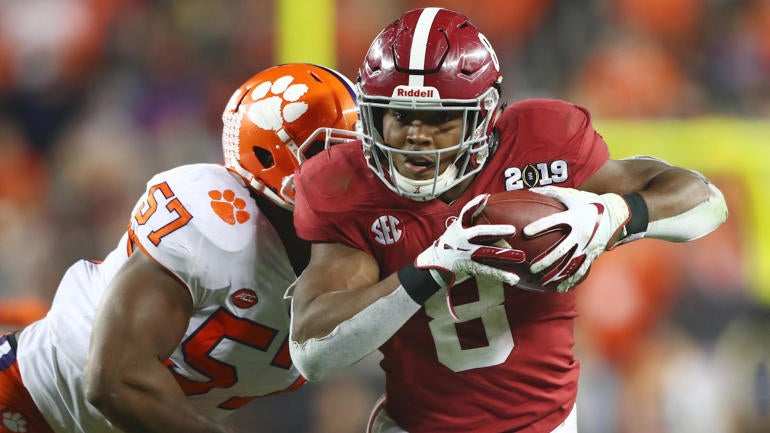 With the No. 24 pick in the 2019 NFL Draft, the Raiders selected Josh Jacobs, running back out of Alabama. Compactly built, one-cut-and-explodes type runner who excels at setting up blocks. Jacobs is difficult to bring down with initial contact he his speed affords him the ability to bounce plays outside — though he doesn’t force it. He runs hard, with purpose, is an efficient pass blocker, shows good hands as a receiver and can also return kicks. He’s the best running back in this class and it’s not close.

Pete Prisco: It kills me to say this, and I wanted to give this pick an ‘A,’ but you know how I feel about running backs going in the first round, but this kid is a great player. He’s fresh and I think he will step in there and be a special player right away. He’s great in blitz pickup as well.

Dave Richard: Fantasy owners should be thrilled with Josh Jacobs going to the Raiders. He was my favorite running back in the draft thanks to his incredible skill set. He’s a strong runner with awesome lateral agility and better speed than he was timed for at the combine. He can catch the ball out of the backfield with his oversized mitts and has shown the willingness to block. Jon Gruden’s track record with running backs is pretty good, namely because they catch a lot of passes. All he has to do is outplay Isaiah Crowell and Jalen Richard. I’d expect Jacobs to be a top-50 Fantasy pick in 2019 redraft leagues and long-term formats. You can also make a very good case for him to be 1.01 in rookie-only drafts.

Chris Trapasso: The consensus top running back prospect in this class is my RB5. And the comparison doesn’t seem too favorable. That’s not my intention. Injuries ultimately derailed Tate’s career, but he entered the league out of Auburn as a polished, explosive runner capable of putting his foot in the ground, accelerating through backside holes on zone runs and running through defenders. He averaged 5.4 yards per carry as a rookie with the Texans. That’s the type of back I see when watching Jacobs. He’s a no-nonsense ball-carrier who packs a punch, has plus vision, and can explode through the hole with dynamic leg drive.

Ryan Wilson: It’s been running back-by-committee for each of Jacobs’ three seasons at Alabama. He had just 85 rushing attempts for 567 yards  (6.7 YPC) and four touchdowns during his freshman season in 2016. In 2017, Jacobs had 46 carries for 284 yards (6.2 YPC) and a touchdown though it was learned after the season that he had been playing with a broken ankle. The 2018 campaign was his best at Alabama; sharing the workload with Damien Harris and Najee Harris, Jacobs was second on the team with 120 carries, third with 640 rushing yards (5.3 YPC) but first with 11 rushing touchdowns.

Ryan Wilson: Jacobs is a compactly built, one-cut-and-explodes type runner who excels at setting up blocks. He is difficult to bring down with initial contact (see PFF metric above) and his play speed affords him the ability to bounce runs outside — though he doesn’t force it. He runs hard, with purpose, is an efficient pass blocker, shows good hands as a receiver and can also return kicks. He’s the best running back in this class, 4.60 40 time or not.

Ryan Wilson: Straight-line speed may be a concern to some teams that wanted to see Jacobs run faster at his pro day. Alabama teammate Damien Harris ran a 4.57 40 at the combine and he’s similar in height and weight. But if you watch Jacobs play, he doesn’t look slow (see him trucking that poor Oklahoma defender above), and again, he runs with purpose, has a wicked jump cut, and shows the speed on tape to get around the edge. He’s also a four-down player, and while he may need to refine his routes of the backfield, he has soft hands and in the process adds another element to an offense. To reiterate, via the head of the Senior Bowl, former NFL scout Jim Nagy: