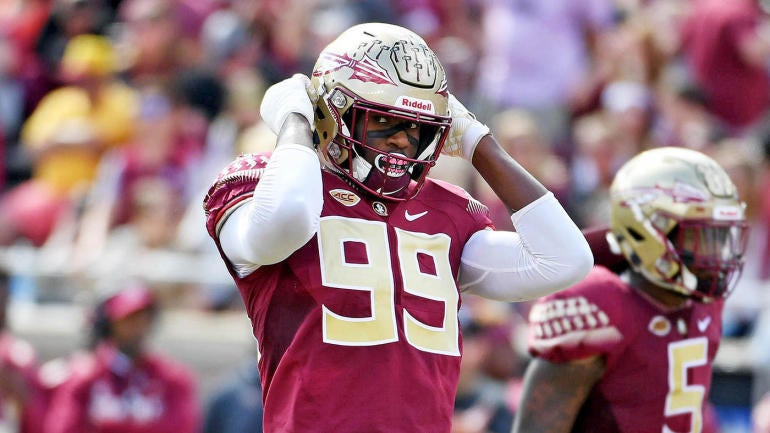 With the No. 16 pick in the 2019 NFL Draft, the Panthers selected Brian Burns, edge rusher out of Florida State. Concerns about his weight (he reportedly played at 235 during the 2018 season) were alleviated at the combine where he weighed 249. It didn’t hurt that he ran a 4.53 40. Burns is an explosive edge rusher who is surprisingly strong. Regularly wins to the outside with his speed but showed the ability to run stunts inside as well. Needs to get better with hand usage and better develop his pass-rush moves but he reminds us on the field of Aldon Smith.

Pete Prisco: This is one of the guys when you look at him you see speed, speed and more speed. The Panthers had all kinds of problems rushing the passer last year and Julius Peppers retired, so this makes sense. Good pick for the Panthers. I really like this pick.

Dave Richard: The Panthers will find a way to put weight on Brian Burns and turn him into a pass rushing monster. I liked his game at Florida State and could see him developing into the kind of rusher Carolina desperately needs. If he’s indeed listed as a defensive end, he’ll carry some low-end value in Fantasy drafts this year but I’d eye him in dynasty leagues for his long-term potential. The Panthers DST still has holes to fill — I wouldn’t believe it if you told me they were done addressing their pass rush — so that combined with a Week 1 date with the Rams makes them unappealing to start the season.

Chris Trapasso: Smith had more weight on his frame when he came into the league out of Missouri than Burns does now. Stylistically, they’re nearly identical. Smith could dip low underneath tackles as flew tightly around the edge. While he was aware he needed to use his hands, he wasn’t particularly polished utilizing them. His speed rush was his most dangerous move. All that is true for Burns, a long, Gumby-like rusher who will threaten most pro tackles with his explosive first step, long arms, and ability to dip around the corner. If he develops go-to pass-rushing maneuvers with his hands to counter his outside rush, Burns can be an All-Pro type.

Among all FBS edge rushers, Burns ranked 15th in generating inside pressure, according to Pro Football Focus’ metrics and he was 21st in pass-rush productivity.

Ryan Wilson: Concerns about Burns’ weight (he reportedly played at 235 during the 2018 season) were alleviated at the combine where he weighed in at 249 pounds. Also helping: The aforementioned 4.53 40 time. Burns is an explosive edge rusher who is surprisingly strong. He regularly wins to the outside with his speed but showed the ability to run stunts inside as well.

Ryan Wilson: Burns needs to get better with hand usage and better develop his pass-rush moves but he reminds us on the field of Aldon Smith, who had 14 sacks as a situational pass rusher during his rookie season with the 49ers.