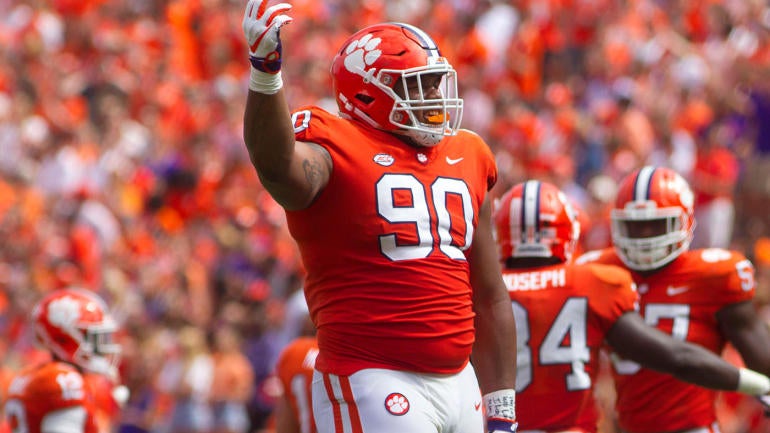 With the No. 17 pick in the 2019 NFL Draft, the Giants selected Dexter Lawrence, defensive tackle out of Clemson. Regularly requires double teams, pushes the pocket even if he’s not a pure pass rusher. Disrupts passing game by getting hands up, deflecting passes and also has athleticism to drop into zone coverage. Is he a three-down player? That’s what NFL teams will have to decide but there’s no denying he’s an immovable object in the middle of the defensive line who can use his sheer power to regularly be disruptive near the line of scrimmage.

Pete Prisco: The Giants wanted to come away with one big guy, whether it be a defensive lineman or an offensive lineman and a quarterback in the first round. Gettleman is doing exactly what he wanted to do. He wanted to get a big, massive man on the line and he did just that.

Dave Richard: Dexter Lawrence will plug a hole on the Giants defensive line right away. His massive size (6-4, 342) will make him a bear to contain in the run game but he doesn’t offer much in pass rush skills. He won’t be an IDP factor and does little to make the Giants DST any better.

Chris Trapasso: Somehow, many questioned Joseph’s on-field strength against the run while at East Carolina, but he’s been a rag-dolling behemoth during his time at the NFL level. Oh, and he did 39 reps on the bench at his combine. Despite being 6-foot-5 and nearly 330 pounds, Joseph was far from a stationary nose tackle prospect. He utilized his hands impressively and had rare athleticism for a pro his size, both of which allowed him to generate pass rush relatively often. All of that describes the even bigger Lawrence. His bull rush is stupidly powerful.