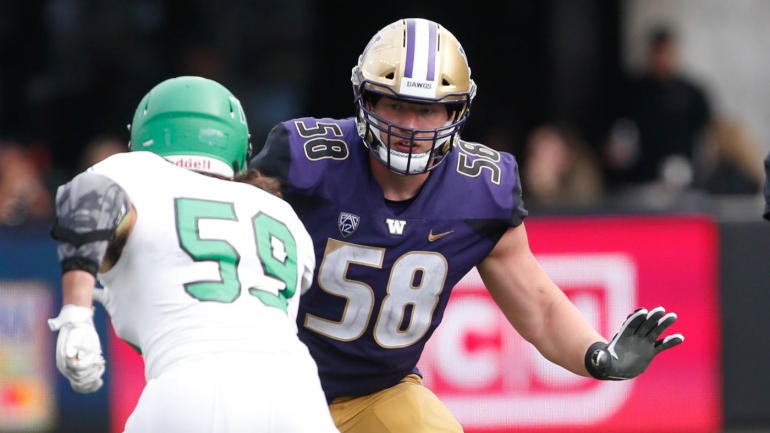 With the No. 31 pick in the 2019 NFL Draft, the Falcons traded up to select Kaleb McGary, offensive lineman out of Washington. Tall tackle who plays with a low, under-control style, is linearly explosive for his size, but lacks lateral mobility. Poppy combo-blocker who’s very useful when asked to get to the second level but his feet stop moving at times when facing an outside speed rush. Starter potential but probably best as a swing tackle to start his career.

Pete Prisco: I understand why they wanted to do it. They don’t have a long-term answer at right tackle. Maybe he goes in and plays right tackle next year. The Falcons said they’ve gotta get better on the offensive line. I like this move paired with Lindstrom earlier.

Dave Richard: The Kaleb McGary pick surprises me. I felt the Falcons were set at offensive line but perhaps they’re going for building into the future. McGary is a mammoth at 6-foot-7 and has played right tackle for four years at Washington. This means Ty Sambrailo is on final notice, I suppose.

Chris Trapasso: Robinson was one of the most roller coaster evaluations I’ve ever done for an offensive tackle. On one series, he’d look like the No. 1 overall pick in the draft. The next possession he’d look like an undrafted free agent with a severe lack of balance in pass protection or accuracy at the second level. That essentially describes McGary, a large, long, highly athletic tackle with a major boom or bust game.