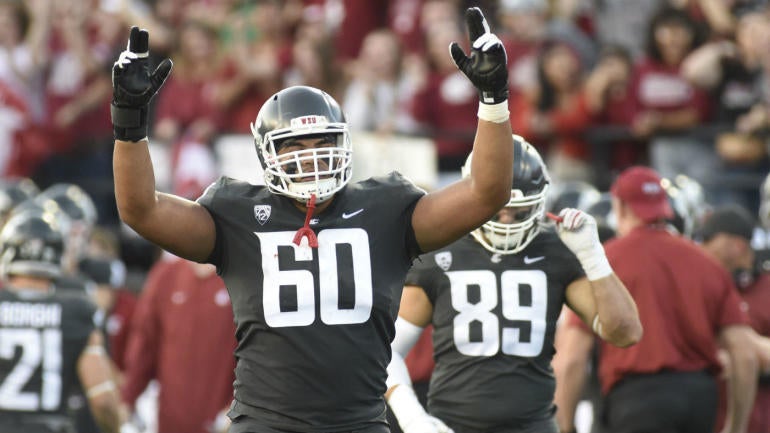 With the No. 22 pick in the 2019 NFL Draft, the Eagles traded up to select Andre Dillard, offensive tackle out of Washington State. Elite athlete for the left tackle spot with a surprisingly power anchor and above-average awareness of stunts. Short, powerful punch, and his feet continue to move as he mirrors edge rushers. Not much run-blocking experience in college, but he has the refined talent to be a franchise left tackle in today’s NFL.

Pete Prisco: He’s a good pass protector but he didn’t have to put his hand in the ground. Eventually he’ll have to, but can he? He better be a guy you can plug in there and be a 10-year starter and make some All-Pro teams. Taylor would have been my pick in this spot.

Dave Richard: The Eagles are doing themselves a favor by drafting Andre Dillard. He’s a safe, solid offensive tackle who can step in to replace Jason Peters when he gets hurt this year or retires in 2020. The move has no real impact in Fantasy drafts this season.

Chris Trapasso: Armstead is more explosive of an athlete than Dillard, which gives context for how gifted the Saints left tackle is, because Dillard was the clearly the most athletic tackle at the combine. However, their styles are very comparable. Armstead wins with sheer quickness to the pass-rushing apex — where edge rushers either turn the corner or are pushed off it. He’s also fantastic with his punch timing and accuracy as a pass blocker. So is Dillard. He fires back into his kick slide and is tremendous with his hands. Because Dillard and Armstead are so fast, they rarely look uncomfortable as pass blockers and get the extra split second needed to sink their hips and anchor if they see a bull rush coming. When Armstead entered the league out of Arkansas Pine-Bluff, he was behind as a run blocker. The same goes for Dillard, who simply didn’t get the normal amount of run-game reps in Washington State’s Air Raid system.

Ryan Wilson: After appearing in just three games in 2015. Dillard played in 13 games in each of the next three seasons. After allowing nine sacks in his first two seasons as a starter, Dillard allowed just one sack last season while protecting quarterback Gardner Minshew.

Among all FBS offensive tackles in 2018, Williams ranked sixth in Pro Football Focus‘ pass-blocking-efficiency metric and was in the top 20 in pressure — inside, outside or bull rush — allowed.

Ryan Wilson: Dillard has smooth feet, long arms, a good mirroring technique, and shows he can effortlessly deals with twists/stunts and passing blockers off to other offensive linemen. He also has the athleticism to get out in space on screen passes, and the ability to pull in the run game.

Ryan Wilson: Played in a pass-heavy offense and was rarely asked to run block. Dillard doesn’t have the same anchor as Oklahoma’s Cody Ford, Florida’s Jawaan Taylor, West Virginia’s Yodny Cajuste or Kansas State’s Dalton Risner but is more athletic than they are.