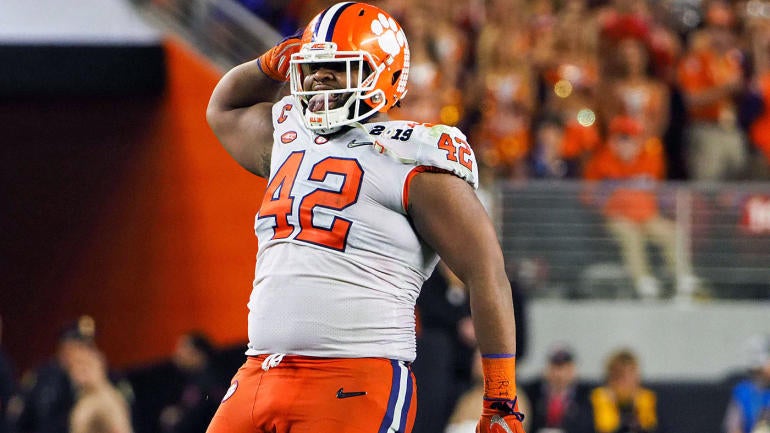 With the No. 13 pick in the 2019 NFL Draft, the Dolphins selected Christian Wilkins, defensive tackle out of Clemson. Thick, muscular, well-rounded defensive tackle who can carry out multiple responsibilities up front, whether it be one-gapping or eating blockers. Good, not great athleticism but is a polished hand work defender who can overpower guards and centers. Should be a solid asset for the team that drafts him for his entire career.

Pete Prisco: This is my favorite pick of the entire draft so far. Love this pick. I think this kid is going to be a star. I was all over Grady Jarrett when he was picked and I think Wilkins could be even better. This is a good building block for Brian Flores and his staff.

Dave Richard: As a football fan, I can’t argue with the Dolphins’ pick of Christian Wilkins. He’s a beast on the field, especially when it comes to pass rush, and a good dude off the field. As a Fantasy Football player, I don’t see much value. Wilkins will play on the Dolphins defensive line and should come up with a handful of sacks per year. I don’t see him contributing much else. Maybe he’ll be a final-round pick in deeper IDP leagues? The Dolphins DST will be a good unit in 2020 or 2021, but not in this rebuilding season.

Chris Trapasso: Ogunjobi was a little lighter as a prospect than Wilkins is now. As Ogunjobi did at Charlotte, Wilkins had a long, illustrious career at Clemson thanks to a high motor, solid athletic traits, and the ability to defeat any type of block sent his way. Also, both players flourish in the trenches because they’re country strong and aren’t easily pushed off their foundation against the run. Like Ogunjobi has been in his first two seasons in Cleveland, I expect Wilkins to step in as well-rounded of a player as it gets at defensive tackle — while maybe never being spectacular.

Ryan Wilson: Wilkins can play over center or as a 1 or 2-technique but he also shows speed to shoot the gaps and regularly requires double-teams. He has an effective swim move to beat one-on-one interior linemen to get into backfield and he has a good motor, never giving up on play, hustles downfield to make tackle. Not as explosive or strong as Quinnen Williams but consistent, surprisingly quick and smart. Was also the personal protector on the punt team and even took a snap at safety in the 2018 spring game:

Ryan Wilson: Can disappear during stretches and struggles to hold up against double teams, though he had no problem against Alabama here: