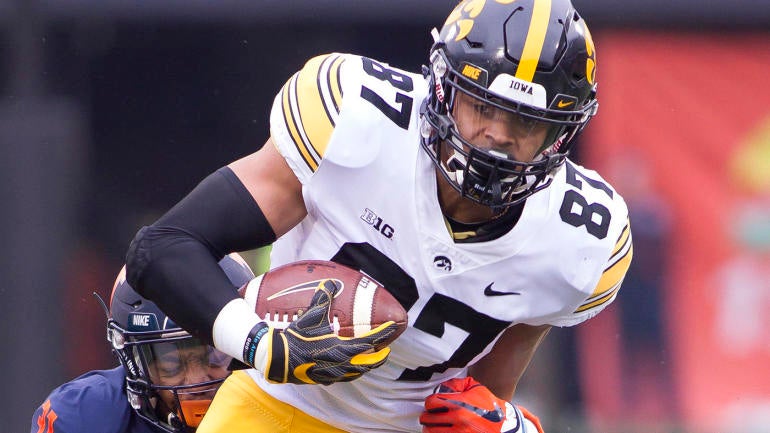 With the No. 20 pick in the 2019 NFL Draft, the Broncos selected Noah Fant, tight end out of Iowa. Springy, fast, and elusive seam-stretching tight end with receiver-like pass-catching skills. Experience and flashes of consistency in-line as a blocker. What he brings primarily is his plus ability to boost the passing game.

Pete Prisco: I like Noah Fant. I think it’s a good pick for the Broncos, but I probably would have taken Drew Lock here. Joe Flacco is not the long-term answer at QB. Fant is a move tight end and they are becoming more valuable in the NFL, but I would have taken Lock.

Dave Richard: Noah Fant has the potential to be the next great Fantasy tight end, but it’s going to take some time. He’s got the size for it, not to mention the speed, but Fant will need coaching to be a better route-runner and blocker. Lining up with Joe Flacco will make people believe he’ll be a regular target, but I’d reserve judgment on that. Fantasy bosses need to be patient before calling Fant a must-start guy, but as late-round picks go, you could do worse.

Chris Trapasso: Fant is a relatively rare tight end prospect and that’s mainly due to his athletic talent. He crushed his combine workout and doesn’t play slower or any less explosive than some of times and measurements indicate. Like Howard, he’s a big-play waiting to happen, and actually Fant is a bit more consistent in the open field after the catch than Howard was. Both have elite top end speed for the position that allows them to take a short route the distance if given space. Fant and Howard were both well-versed but not dominant as blockers in college.

Ryan Wilson: After nine receptions for 70 yards and a score as a freshman in 2016, Fant tied for the lead in touchdowns scored by a tight end when he tallied 11. He also had 30 receptions for 494 yards and a gaudy 16.5 yards-per-catch average. Last season, playing alongside another first-round talent in T.J. Hockenson, Fant had 39 catches for 519 yards and seven scores.

Among all FBS tight ends, Fant ranked sixth in Pro Football Focus‘ yards-per-route-run metric and was in the top seven in deep pass receptions, deep pass yards and third in receptions from the slot.

Ryan Wilson: Fant is off-the-charts athletic. He’s a long-strider who eats up cushions quickly. He can also seal the edge in the run game though that isn’t his strong suit. Fant can line up in slot, where he is matchup nightmare for every linebacker, most safeties and a lot of cornerbacks too. He gets in an out of his breaks almost effortlessly and snatches balls out of the air.

Ryan Wilson: Fant isn’t your typical inline blocker and while he can play anywhere on the field he’s most dangerous in passing situations. That said, don’t think Fant can’t block at all because he can: