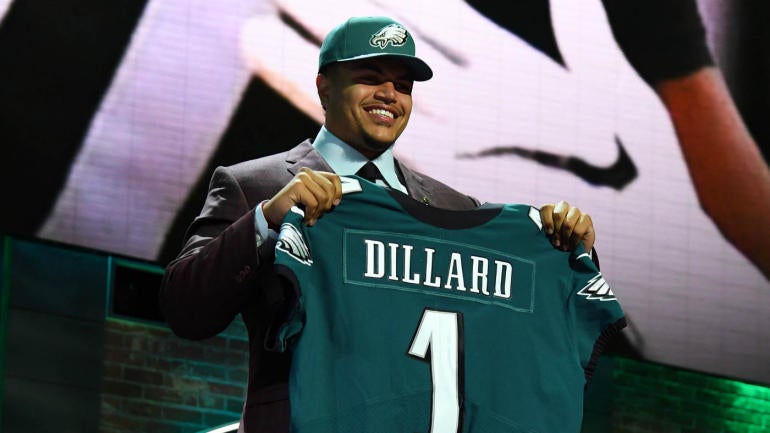 The Eagles already have their quarterback of the future and now they might have their left tackle of the future after outmaneuvering the Texans to land Andre Dillard during the first round of the NFL Draft on Thursday.

According to NFL.com, the Texans were targeting Dillard with the 23rd overall pick, but the Eagles didn’t let that happen, because they decided to trade up and get him. In a deal with the Ravens, Philadelphia moved up from the 25th spot to the 22nd spot so they could land Dillard.

To move up three spots, the Eagles sent three picks to Baltimore. The Ravens landed the 25th overall pick from Philly, along with a 2019 fourth round pick (127 overall) and a 2019 sixth round pick (197 overall).

It’s easy to see why the Eagles were so high on Dillard. Not only is left tackle Jason Peters getting up there in age (he’s 37), but he’s been battling injuries over the past two seasons. Peters is only contract for one more season, which means he’ll likely be serving as the starter in 2019 before passing the torch on to Dillard.

CBS Sports senior NFL writer Pete Prisco didn’t love the Eagles’ pick, but he also didn’t hate it, giving Philly a ‘B-‘ for their selection.

As for the Ravens, they used their newly acquired pick from the Eagles to fill one of their biggest needs: Wide receiver. With the 25th overall selection, the Ravens took Marquise Brown, which was interesting for multiple reasons. For one, the Ravens basically have zero depth at receiver, which means there’s a good chance he’ll be starting right away. Also, the Ravens’ new draft pick is related to Antonio Brown, so you can bet AB will be cheering for his cousin big time whenever Baltimore plays the Steelers.

CBS Sports senior NFL writer Pete Prisco loved the Marquise Brown pick, giving the Ravens an ‘A’ for their selection.