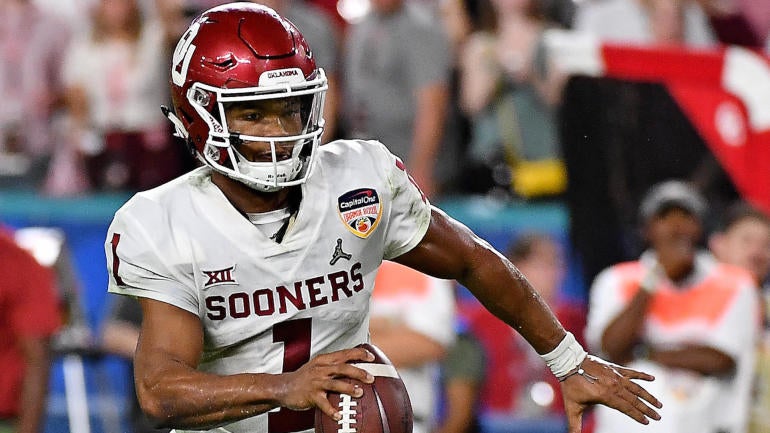 The 2019 NFL Draft is finally here. We’re just hours away from the draft finally getting underway, which means it’s time to lay everything on the line and make some predictions. BOLD predictions, even.

I honestly think this is one of the most unpredictable drafts we’ve seen in the last 10 years or so. There’s no massive talent gap along the front lines. Maybe there are four or five prospects who are top shelf guys (Nick Bosa, Quinnen Williams, etc.) but the separation between them and the rest of the pack isn’t that huge.

And the separation between the next tier of guys and the 40-50 guys behind them is borderline minuscule. You could end up seeing a LOT of guys fall and a number of different first-round picks come out of the woodwork in very unexpected fashion.

Predicting anything in this draft, especially when we don’t know who will actually go No. 1 overall, is a fool’s errand. Let’s get foolish.

We’ll have more of these queued up on the Pick Six Podcast in the coming days — as well as a daily recap of every round of the draft — so make sure and subscribe to our daily football podcast.

There’s a lot that makes sense here, which I outlined in great detail right here. But here’s the gist of it: the Raiders sent everyone home from their draft room, they want to make a big splash, there’s buzz that Jon Gruden really likes Kyler Murray and might not love Derek Carr, the Jets present a problem at No. 3 if the Cardinals pass on Kyler with the No. 1 pick, the Cardinals would love someone to take the Kyler problem off their hands and the Raiders/Cardinals have a history of trading, dating back to last year.

To be more specific: the Raiders like Kyler and can explore trading for him without Carr finding out about it via a leak, the Cardinals would love to recoup some value and move down, so those two sides make sense. No. 4 is a great spot for Arizona to still get a stud. The Raiders need to jump the Jets if Kyler isn’t going first overall, or else they might miss on him. Call Steve Keim, ask for the first overall pick for No. 4 and No. 27 and get it done.

You’ll be able to stream our live draft coverage right here on CBS Sports HQ (or download the CBS Sports app for free on any mobile or connected TV device). We’ll be breaking down all the picks and everything you need to know during draft weekend.

2. The Giants don’t take a quarterback

And everyone gets mad. That last part isn’t bold though: everyone WANTS to get mad at Dave Gettleman and his draft strategy. But here’s the truth … this is a perfect draft for Gettleman. He loves big bodies on the offensive line and defensive line — hog mollies he calls them — and he’s not going to pass up talented football players to take a quarterback unless ownership is forcing his hand. I don’t think we’re at that point yet and I bet that Gettleman still has control of this draft. As such, I believe there are roughly 15-20 players he will take before he takes a quarterback, and I think they’ll be on the board by the time he’s selecting at No. 17. I would be stunned if the Giants took Daniel Jones or Dwayne Haskins with the sixth-overall pick. It makes sense, because you don’t want to lose out on a player that you covet, but Gettleman’s shown a willingness to stick with his board throughout his history as a GM. He’ll take the best player and try to win this year with the Giants’ current roster. I would bank on Dexter Lawrence being one of the guys he takes too.

3. Parris Campbell will be the first WR drafted

This is an interesting one cultivated mostly out of chatter around the league as well as hearing from smart minds who appeared on the Pick Six Podcast — it’s daily, it’s free, you can subscribe and you should do that right now whether it’s on iTunes or on Spotify or on Stitcher — and also born out of the wide receiver group that fills up the 2019 NFL Draft class. It’s just a really weird group that looks like something you’d find behind the glass at a fat-free yogurt shop. All kinds of flavors but nothing that really blows you away. Campbell showed explosion all over the place, and it’s possible he wasn’t even used in an entirely proper manner because of the Ohio State offense. The odds of him being the top wideout taken are probably the best value out there — you can get him at 50-1 at FanDuel Sportsbook right now (go bet that if you live in New Jersey) — and it shouldn’t be that big a gap. I would think Campbell should be more like 10-1 at worst. Marquise Brown is his biggest threat in my opinion, with the Oklahoma product getting his medicals back and looking pretty clean. D.K. Metcalf could also go early but …

What if Metcalf’s inability to move laterally and his struggles in certain combine areas scare NFL teams off? I think it’s very possible that a combo of physical limitations, reduced production in college, a history of injuries and a deep draft class could easily push Metcalf down the board. The best landing spot for the Ole Miss product would be a with a team in the 1-12 range, but those teams aren’t going to spend on a wide receiver in this class; they’ll just wait until the second round and take N’Keal Harry or Kelvin Harmon instead. It’s much cheaper and an obviously better option.

The Vegas over/under for T.J. Hockenson is surprisingly low at 9.5, meaning not many people expect him to go in the top 10. With all these defensive players available, you could easily see a defensive heavy draft coming down. But I think Hockenson is going to go early, and I believe he comes off the board either at No. 6 (Giants as a major sleeper for him), No. 7 (Jags make total sense) or No. 8 (Lions could work too). At that point, someone would have to surprise and either trade up or decide to take Noah Fant, but the importance of the position and chess-piece nature of Fant, along with his red zone ability, will ultimately make someone else jump up ahead of the Packers — rumored to be interested in Fant — and take the second Iowa tight end. If they don’t, Fant lands with Green Bay.

I’ve got Murray going first to Oakland, but I think we see a drop coming for the other guys. I know it flies in the face of convention, but I just think there’s a chance Dwayne Haskins and Drew Lock could fall a lot further than they’re projected. If that happens, it’s easy to see them being pushed down into the latter stages of the first round and teams being willing to gamble they can get the quarterbacks early in the second round. But I think teams in the second round are going to see the value remaining on the board in the first round and decide they can kick it in the second round and get their quarterback without trading up. Additionally, the teams in the first round will believe the value is too good for where they’re sitting to pass on the guys who fall to them.

Is this bold? Maybe not. Clemson is loaded with great draft prospects, but they’re also all from the same position (defensive line). I think all three of the prospects go in the first round, with Clelin Ferrell and Christian Wilkins serving as obvious options. In my mind it would be surprising if Dexter Lawrence made it out of the first round, but I understand why people have him dropping. On the Alabama side, I think there needs to be a wild card — either Josh Jacobs or Irv Smith — taken in the first round in order to match the Tigers. It’s mostly a reminder that Clemson is better than Alabama, in case anyone forgot.