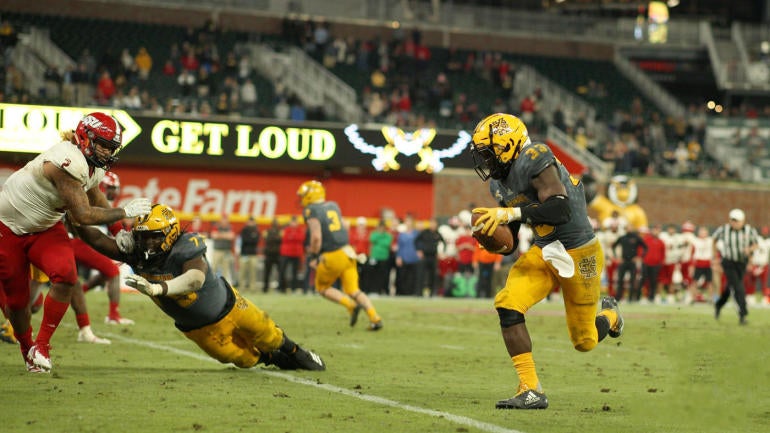 The first round of the draft will garner the most attention this week — what was once a lazy weekend affair is now a primetime spectacle — but successful NFL teams separate themselves on Day 3. It’s in these late rounds that good scouting departments add quality roster depth, find special teams contributors and unearth those diamonds in the rough.

Grady Jarrett, Stefon Diggs, and Tyreek Hill were all late-round gems in recent drafts and last season, an undrafted Phillip Lindsay parlayed a 1,000-yard rookie season into a Pro Bowl appearance. Kennesaw State running back Darnell Holland hopes to be the next off-the-radar prospect to be an NFL difference-maker.

Last season Holland had 80 carries for 949 yards (that’s a whopping 11.9 yards per carry) and nine touchdowns. He added nine receptions for 182 yards (20.2 YPC) and two more scores. He’s not a one-season wonder either; Holland has been a big-play threat since his freshman season:

But there’s more — as a senior, Holland had 13 kick returns for 437 yards and a touchdown.

And while those are eye-popping numbers, and Kennesaw State is one of the best FCS programs in the country, the Owls feature the triple-option offense. This makes them incredibly difficult to defend — but it also makes it tough to project how Holland’s game might translate to the next level.

“One thing about me is that I’m a quick learner,” Holland said Monday when we asked him about moving from a run-heavy offense to the NFL. “So for me, I made sure I kept all my options open, preparing and training for all aspects of the game — running routes, being quick out of my breaks, being physical. These are things I work on consistently during my training here in Georgia. I feel that all of my strengths will show in any offense I join just because I’m actually able to do a combination of things.

“Once I find the scheme and the way the coaches want it done, I confidently feel that can take care of that task completely.”

Triple-option or not, Holland is generating some buzz thanks to a 37.5-inch vertical leap and a 4.38 40 time at his pro day last month. That, along with those 2018 stats, will get your attention. And it explains why he’s had private workouts for two NFL teams. He knows whatever comes next is out of his hands but all he’s looking for is an opportunity. It’s how he got his break at Kennesaw State.

“I wasn’t recruited at all,” he explained. “I’m from a small high school [in Georgia], I graduated with 98 students. We didn’t have the history of getting guys into college and [then to the NFL]. So coming from where I came from there wasn’t much expected of us athletes other than be good while you’re here and after that get a job. So for me, it took coaches taking a leap of faith because, yes, my film was really nice but for them it was like, ‘He’s from a small school and he won’t be able to [have that success] in college.’

“[Kennesaw State was] the only [FCS] school that recruited me. They brought me in on a visit and I signed with them the next day. They recruited four running backs, they redshirted two, they cut one and I played in the very first game [my freshman year] and I’ve not missed a game since. I scored a touchdown, had 80 yards are two carries in that first game and it was more like, ‘OK, Darnell can actually play at the next level.'”

By his senior season at Kennesaw State, Holland was one of the focal points of the offense. In a midseason game against Charleston Southern, he finished with 84 rushing yards on seven carries, but it was his 65-yard touchdown reception that sticks out in the mind of Charleston Southern co-defensive coordinator Bryant Foster.

“He shook off a tackle from the linebacker and he juked one of the defensive backs,” Bryant told us, remembering the play. “The thing about Darnell, he’s a very explosive player. He’s a one or two-cut type guy and the thing that was more surprising was how well he caught the ball. We knew once he got the ball on the perimeter he had a chance to take it the distance.

“We knew he was fast, and he’s a strong runner. He can break tackles, make guys miss in the open field. He can run over guys and run past guys. He was a very special back for them.”

A week later, the Owls faced Campbell University, one of the few teams to slow Holland down — but it came at a price; Kennesaw State rolled, 49-0. But as Campbell’s defensive coordinator Weston Glaser explained to us recently, it was a matter of “picking your poison” with the Kennesaw State’s offense. The game plan was to keep the ball out of Holland’s hands and force Owls quarterback Chandler Burks to beat them. Burkes threw for just 49 yards but he rushed for 97 yards and scored four times.

“If they get [Holland] on the perimeter and in space — that’s when that offense can really hurt you,” Glaser said, echoing the same concerns coach Foster raised a week before.

Holland was held to a season-low three carries for no yards against Campbell but he found other ways to contribute.

“I didn’t do as well as I normally do on offense so I found a way to help the team out on special teams,” he said. “That was the game I scored an 84-yard kick return. I found a way to get on the board, made tackles on special teams and blocking on offense to show the guys that it doesn’t matter how many yards I get or how many carries I get, I’m still finding a way to help my team out and be the best player and teammate I can be.”

One way or another, Holland will know his football fate in the coming days, whether it’s hearing his name called during the draft or trying to make his way as an undrafted free agent.

“I’m a well-rounded player and feel like I deserve a chance wherever I go,” he said. “[An NFL team] won’t be taking a chance on me for anything off the field. My character speaks for itself, I’ve never been arrested, never used drugs, don’t have any baggage. So once I get the opportunity that I’ve been preparing for, I feel I will go well above what people expect because of my strong faith in Christ. … Coming out of high school, people had no idea that I would make a name for my family, for my community and for myself.”

Here are four other small-school standouts who, like Holland, not only have a good chance to hear their name called during the 2019 NFL Draft but have the athleticism to play on Sundays next season.

A converted wide receiver, Denmark made move to cornerback in 2018. At 6-foot-4 and 220 pounds, Denmark is enormous by cornerback standards. That said, don’t be fooled by his size — he blazed a 4.46 40 at his pro day. Not surprisingly, he has the physical strength to jam wide receivers (right out of bounds, sometimes) and shows the ability to come out of his break to make plays in front of him. Denmark lays the wood like a safety and has good ball skills but is still extremely raw, faced only Division II competition, and will need time to acclimate to the NFL.

Johnson is an explosive playmaker with the short-area quickness to shake defenders and create separation. He has quick feet and uses his hands well to win at the line of scrimmage. He regularly wins on short, intermediate and deep routes despite his size (5-foot-10, 183 pounds). That said, he needs to become a more consistent route-runner at the next level, though there’s already a lot to like in his game.

Moreland is just 5-foot-9 and 179 pounds, but if here were two inches taller and 10 pounds heavier we might be talking about him as a first- or second-round pick. The JMU standout had 18 career interceptions, including five last season to go along with 15 passes defended, 7.5 tackles for loss, two sacks and a forced fumble. Moreland ran a 4.46 40 at his pro day and has some of the quickest feet and best ball skills in this draft class.

Guyton tested well in pre-draft process, running a 4.37 40 and 6.9 3-cone at 6-foot-1 and 200 pounds. He’s an athletic deep threat who began his career at Notre Dame, and before that, played high school football with Kyler Murray.