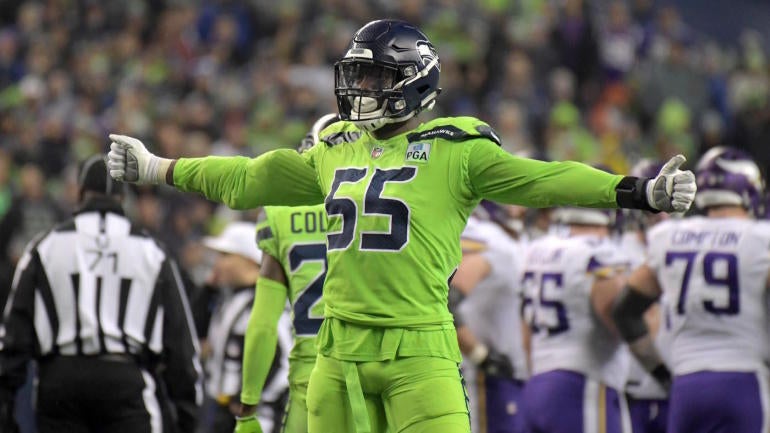 As the 2019 NFL Draft nears, the trade winds have brought an update on a potential deal that would send shockwaves throughout the league. But in a somewhat surprising turn of events, the reports aren’t at all related to a Josh Rosen deal. Instead, the rumblings as of Monday are solely focused on Seahawks defensive end Frank Clark, who has been franchise-tagged by the team.

On Friday, NFL Network’s Ian Rapoport reported that Clark could get traded before the draft. ESPN’s Adam Schefter chimed in to add that the Seahawks would require a first-round pick to move Clark. Despite the high price tag, Rapoport said at the time that “several” teams are interested in acquiring Clark.

On Monday, some of the suitors were unveiled. According to Rapoport, the Chiefs, Colts, and Jets have all discussed a possible trade with the Seahawks. They’re among the several teams that are interested in Clark.

It’s not difficult to understand why so many teams would at least reach out to the Seahawks about Clark, a 25-year-old defensive end who can both set the edge and attack the quarterback. He’s racked up 35 sacks in four seasons, including nearly 11 per season since his rookie year. He’s a very good player, even though teams could be scared off by his troubling history away from the field.

The price tag is also expensive. Not only will teams be forced to cough up a first-round pick, they’ll then need to give Clark a new contract that would be pricey. Defensive end Trey Flowers just signed a deal with the Lions that pays him $18 million per season. It’s likely Clark’s new contract would be in the same ballpark.

That said, the Chiefs and Colts aren’t wrong in being interested. Both teams are contenders in the AFC. And both could use an upgrade on the edge.

The Colts signed former Chiefs pass rusher Justin Houston in free agency, but they shouldn’t stop there in trying to bolster a defense that ranked 19th in sacks last season. The Chiefs are even more desperate for pass-rushing help after they parted ways with Houston and Dee Ford, a duo that combined for 22 sacks in 2018. Perhaps most importantly, both teams aren’t picking until the end of the first round. Giving up a first-round pick for Clark is a whole lot easier to stomach when that pick is in the mid-to-late 20s.

That should put the Chiefs and Colts ahead of the Jets in the Clark sweepstakes considering the Jets are currently slated to pick third (they reportedly want to trade down). The Jets also don’t own a second-round pick, although trading back out of the No. 3 spot could land them one. While the Jets need pass-rushing help after missing out on Anthony Barr in free agency, they probably won’t want to give up the No. 3 pick and a whole bunch of money for Clark. Taking a pass rusher at the top of the first round is probably the smarter strategy given how much cheaper a rookie would be compared to Clark (whether the rookie will be as good as Clark is an entirely different thing, of course).

That’s why it’s not surprising to hear Connor Hughes of The Athletic report that while the Jets are interested, they don’t really have the “ammunition” to complete a deal.

That also might be why the Jets don’t have any serious interest in Clark, according the New York Daily News’ Manish Mehta, who added that the Jets did do their “due diligence” on a possible Clark trade.

That’s where we’re at as of Monday afternoon. There’s no guarantee the Seahawks will trade Clark. Clark could always play under the tag, which would pay him roughly $17 million in 2019. The two sides could always agree to a deal of their own. Just because the Seahawks are willing to listen to offers doesn’t mean they have to follow through by actually trading him. Smart teams listen to all offers.

With only three days remaining until the draft, we should find out soon enough how the team plans to proceed with their best edge rusher.

About the draft: You can stream our live coverage right here on CBS Sports HQ (or download the CBS Sports app for free on any mobile or connected TV device). We’ll be providing live analysis of all the picks and everything else you need to know during draft weekend.