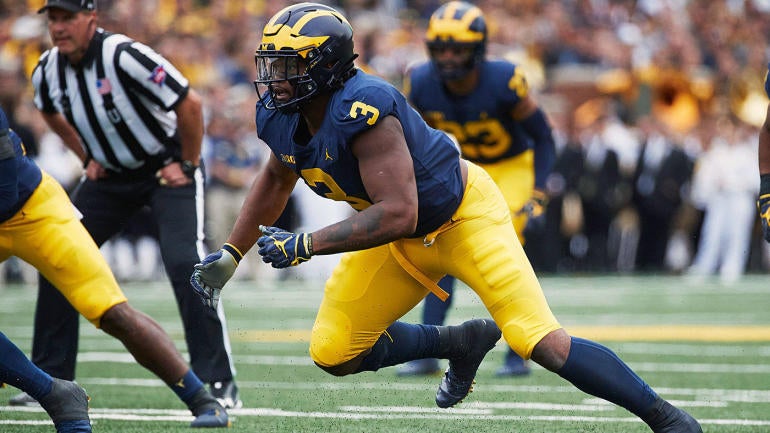 It’s draft week in the NFL, which means mock draft season is nearly finished (just kidding, there will be mocks for 2020 the day after the draft ends). The order is set — except for the inevitable draft-day trades — and everyone has been mocked to practically every team this offseason. It’s a defensive line-heavy draft, but Kyler Murray remains one of the NFL‘s most interesting prospects.

Draft expert Ryan Wilson joined Will Brinson on the Pick Six Podcast to talk about the draft on Monday. Wilson did a seven-round mock draft (which you can read here), and the guys went deep into each pick on podcast’s final Mock Draft Monday of the season.

Wilson starts by taking Kyler Murray to the Cardinals at No. 1 overall, while the 49ers get Nick Bosa and the Jets land Josh Allen. None of that would be shocking (though the Jets are likely seeking a trade down with their No. 3 pick), but Wilson likes Rashan Gary — one of the draft’s riskier prospects — at No. 4 to the Raiders.

He defended his pick, saying “Jon Gruden complained every week about not being able to get sacks, and he couldn’t understand why. So Rashan Gary is sort of this Oakland Raiders, Al Davis type athlete. Just insane, one of the best athletes in this draft class. He did not play well at Michigan, didn’t live up to the hype, he was the No. 1 high school recruit coming out…”

Wilson added that Gary, used properly “could be a Von Miller type threat off the edge, play in and play out.”

It would be an incredibly gutsy move, but Gruden might need to get gutsy to try to generate some pressure after trading Khalil Mack and losing Bruce Irvin last season. Wilson acknowledges the risk behind the pick, but adds that he thinks that Gary’s ceiling makes him a worthwhile risk to take.

To hear the full conversation, listen to the podcast below, and subscribe/listen daily to get all the latest NFL news and notes.