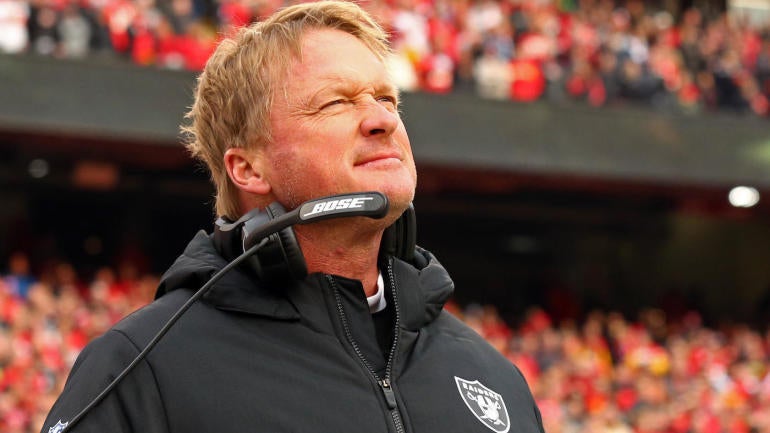 Last week, the Raiders sent all of their scouts home in an attempt to protect their draft plans from a leak. While the Raiders’ plans are still entirely unknown — with three first-round picks, they really could go in a number of different directions — it sounds like they’re planning something entirely unexpected for the 2019 NFL Draft.

On Monday, NFL Network’s Ian Rapoport reported that the “Raiders are looking at … some sort of surprise pick at No. 4 that would necessitate absolute secrecy.”

“That is what I understand: a pick at No. 4 that we are not expecting,” he said. “So what that actually is, I do not know.”

Rapoport went on to suggest a couple of ideas, such as the Raiders taking linebacker Devin White, quarterback Dwayne Haskins or Kyler Murray, or an offensive lineman with the fourth-overall pick. All of those would certainly qualify as surprises to varying degrees.

“It is a pick that should surprise us at four,” Rapoport repeated.

It’s really not surprising to hear that the Raiders will surprise us on Thursday. In addition to holding a ton of draft ammunition due to their decision to trade away both Khalil Mack and Amari Cooper last season, the Raiders are also entering the draft with a whole host of needs. That affords them the luxury of being flexible. It also, of course, adds even more pressure to hit on their picks.

They need a new long-term quarterback to take with them to Las Vegas. After losing Jared Cook in free agency, tight end is an immediate need. The offensive line could be bolstered. A running back could be in play in the first round. The pass rush is still a concern, as is nearly every other position on defense. The Raiders are a bad football team with lots of draft picks, a coach in Jon Gruden who isn’t afraid to make bold moves, and a first-time general manager in Mike Mayock. And so, the Raiders are both the most important and most mysterious team in this year’s draft.

Rapoport already mentioned a few potential surprises, but the one I floated last week remains at the top of my list. What if the Raiders decide they want to take Murray and then manufacture a trade with the Cardinals to move up to the top of the table? It could explain why the Raiders are so concerned about their plans leaking. If the Raiders were to fail to complete a trade with the Cardinals, they wouldn’t want current quarterback Derek Carr to find out they actively tried to replace him. So, the Raiders cleared the room, making sure the scouts — leftovers from the previous regime who aren’t expected to continue working with the team after the draft — can’t leak their plans.

Maybe the Raiders will only try to move up one spot to No. 3 for a player that isn’t Murray. The Jets are interested in trading down from the third-overall pick and the Raiders love defensive lineman Ed Oliver, according The Athletic’s Connor Hughes. Perhaps the Raiders will stay at No. 4 and make Oliver their selection even with someone like pass rusher Josh Allen available.

In his seven-round mock draft, Ryan Wilson explored another possible surprise pick at No. 4: Rashan Gary, the defensive lineman out of Michigan, instead of Quinnen Williams.

Stick with us here. Gary busted out a 4.58 40 at the combine, confirming his status as a freakish athlete among some of the most freakishly athletic players on the planet. Yes, it would be hard for the Raiders to pass on Quinnen Williams here, but in terms of height/weight/speed, Gary checks every box. He can play anywhere on the defensive line but his quickness as an edge rusher could make him unblockable at the next level.

There’s no way to know for certain what the Raiders are planning. Thankfully, we won’t have to wait long to find out. The first round begins on Thursday.

Throughout the entire draft, we’ll be bringing you live coverage right here on CBS Sports HQ, where we’ll be analyzing all of the picks. You can also download the CBS Sports app for free on any mobile or connected TV device.