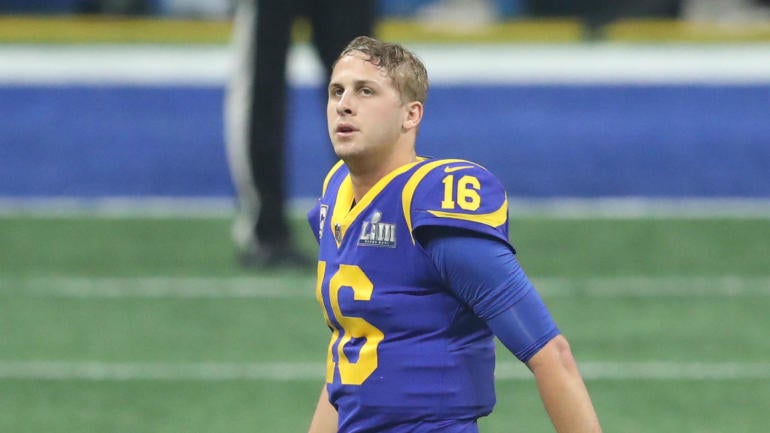 Quarterbacks keep getting paid every offseason — with Russell Wilson as the most-recent example — and it won’t be long until it’s Jared Goff’s turn. Assuming the Rams will pick up his fifth-year option, Goff won’t officially need a new contract until after the 2020 season, but he could be in line for an extension (and a raise) before it gets to that point.

Given how much money could be coming his way, it wouldn’t be at all wrong or surprising for Goff to be thinking about a new deal. But when asked about the topic at offseason workouts last week, Goff downplayed his contract situation.

“Not on my mind at all,” Goff said, per the Los Angeles Times. “I know the deal and understand that I hired an agent for that reason, and things always work out. You continue to play well, it will work itself out.”

Goff is right, of course. He only needs to focus on playing well, because if he plays well, he’ll get paid by someone even if the Rams aren’t the team that pays him. Just look at the contract Kirk Cousins secured last year. Goff might not be on Wilson’s level, but he’s just above Cousins’ tier given his age and potential to ascend. Over the past two seasons with Sean McVay, Goff has completed 63.6 percent of his passes, averaged 8.2 yards per attempt, thrown 60 touchdowns and 19 interceptions, and accumulated a passer rating of 100.8.

That’s not to say Goff has been a perfect quarterback — with his struggles late last season serving as the perfect example of his flaws. In three playoff games, Goff’s completion percentage dropped to 55.7, his average yards per attempt fell to 6.7, he threw only one touchdown and two interceptions, and his passer rating sank to 71.7. If Goff were to play like that throughout the upcoming season, he’d likely be playing for a new contract during the 2020 season.

There’s also an argument to be made that Goff’s success can be attributed to McVay’s scheme and play-calling, and that McVay could be able to get a similar output out of a cheaper quarterback. If the Rams believe that, they could decide at some point that it’s better to trade Goff and then draft a new quarterback for McVay.

Keep in mind, one reason why the Rams have been able to make all of these splashy moves and signings since McVay arrived is because Goff is severely underpaid on his rookie deal. Over the past two seasons, Goff has earned just around $14 million total. That’s an absolute bargain. Once Goff needs a contract that pays him somewhere $30 million, the Rams won’t be able to afford to make the same kind of signings and trades because they’ll have so much money committed to their quarterback. At that point, it’ll be up to Goff to elevate the team around him. While it’s unfair to Goff to suggest his growth is entirely because of McVay, it’s not all unfair to wonder how he’d fare without a strong supporting staff. And keep in mind, stud left tackle Andrew Whitworth already considered retirement this offseason.

I’m not suggesting the Rams would be better off getting rid of Goff before they have to pay him. If Goff lights it up in 2019, he’ll likely get the contract he wants. But I also don’t think it’s outrageous to suggest the Rams would consider the alternative if Goff’s progression stalls over the next year or so.

In any case, this isn’t a debate worth having until after the 2019 season, when we’ve seen how Goff and the Rams have responded to their Super Bowl defeat. For now, it’s just an idea to consider, even if it hasn’t entered Goff’s mind yet.