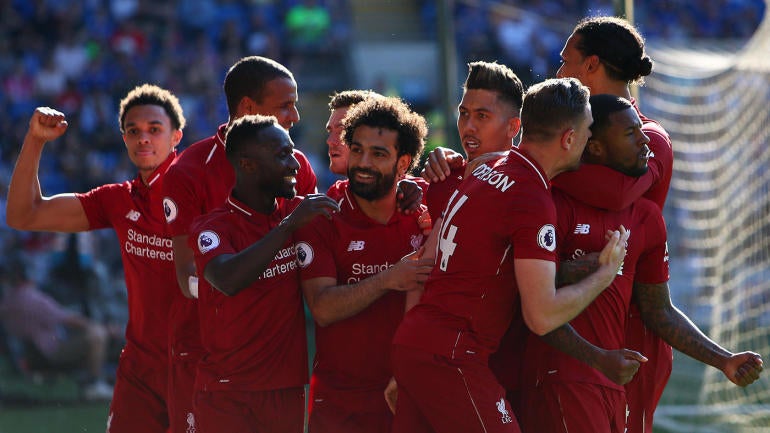 The back-and-forth race atop the Premier League continued on Sunday, two top-four contenders suffered a blow and in total 11 goals were scored in three games. Here’s a look at all of the action from the weekend, the implications of Sunday and what’s ahead.

Liverpool moves back into first

Second-half goals from Georginio Wijnaldum and James Milner gave Liverpool a 2-0 victory at Cardiff City to move back into first. Liverpool had 17 shots and dominated with 77 percent possession to win and put the pressure back on City.

The winning goal came just before the hour mark of a creative corner kick. Just out the fine goal by the Dutch central midfielder:

Manchester United and Arsenal both had big plans this weekend for victories that would really help them finish the season strong. Arsenal was aiming to get into third place with a draw, while Manchester United wanted to keep pressure on the top four or potentially move into fourth. But two stunning results have thrown a wrench into their seasons. United was absolutely destroyed at Everton, conceding four goals, three of which were just incredible. Richarlison had quite the overhead kick to make it 1-0:

Arsenal, meanwhile, was on a high after knocking Napoli out of the Europa League quarterfinals yet couldn’t beat Crystal Palace at home. Arsenal was down 3-1 before a late push to equalize. Arsenal could have gone three points clear of the top four with a win but was outplayed despite having more of the ball, causing this team quite the potential setback. Now, if Chelsea wins on Monday, Arsenal falls out of the top four.

City gets a little revenge on Tottenham

After a rough week that included getting eliminated from the Champions League quarterfinals by Tottenham, City hosted Spurs again on Saturday and earned a 1-0 win to jump Liverpool and move back into first place in the league before falling back to second on Sunday. It was an early goal from Phil Foden that proved to be enough in a game where both teams appeared to have tired legs. The goal came off a lovely bit of play that included a header assist from Sergio Aguero. Take a look:

As a result, City avoided falling further behind Liverpool and can actually go into first on Wednesday against Manchester United.

After losing to Cardiff midweek, Brighton’s five-point lead over the drop zone was reduced to just two. But the southern club managed to go on the road to Wolves and earn a draw that gives this team what could be a very valuable point in the race for survival, considering Cardiff lost.

Liverpool takes care of business and is looking down at the rest of the league, while Arsenal and Manchester United coughed up big chances on Sunday. Remember, the top four teams clinch a spot in the Champions League.

The bottom three drop to the EFL Championship. Cardiff City still has plenty of work to do, while Brighton could be on the verge of staying up.