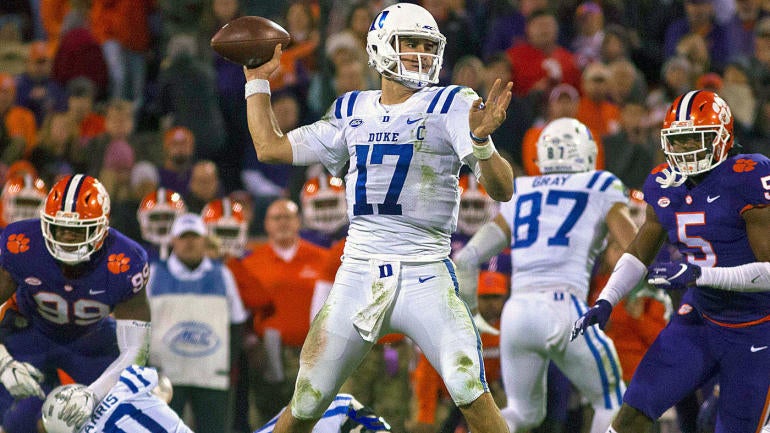 The 2019 NFL Draft is only four days away, but if Daniel Jones’ stock continues to rise at its current rate, he might just have enough time to ascend all the way to the top of the draft board.

In all seriousness, that won’t ever happen — not with Kyler Murray, Nick Bosa, Quinnen Williams, Josh Allen and a whole bunch of other deserving players positioned ahead of him — but as of Sunday morning, it’s becoming impossible to deny that Jones is this year’s biggest riser, the player experiencing the greatest late surge that has erased his status as a fringe first-round pick and elevated it to a likely first-round pick.

Over the past week, NFL.com’s Daniel Jeremiah had the Giants taking Jones with the No. 6 pick in his latest mock draft, Yahoo’s Charles Robinson reported that one team has Jones as their top-ranked quarterback in the draft (and he strongly hinted that the team in question is the Giants, unless we’re all misreading the signs), and now, a Hall of Fame talent evaluator has even gone so far as to compare Jones to Peyton freakin’ Manning.

According to Gil Brandt, who will be inducted into the Hall of Fame this summer as part of the 2019 class for his work as the Cowboys‘ vice president of player personnel for nearly 30 years, Jones’ film from Duke reminds him of Manning’s film from 20 years ago.

“I. Love. Dan Jones,” Brandt said on a teleconference for Sirius XM NFL Radio, according to NJ.com’s Ryan Dunleavy. “I have to say this carefully: When you watch him and you go back (20) years and watch Peyton Manning, you are watching the same guy. He’s athletic. He doesn’t have a rocket for an arm, but neither did Peyton. Very smart.”

Brandt also ranked Jones No. 17 on his latest big board. Murray, at No. 7, was the only quarterback listed ahead of him. Drew Lock didn’t come in far behind at No. 20 and Dwayne Haskins placed 25th. The four of them are widely considered the four best quarterbacks in the draft and the only ones who will likely get taken in the first round — back at the Senior Bowl, Raiders coach Jon Gruden said Jones would be a first-round pick — but it’s only recently that Jones has overtaken Lock and Haskins on some draft boards. It’s worth remembering that Brandt also predicted at the beginning of the month that four quarterbacks would make up the first 25 selections.

The speculation says that the Giants, who armed with pick Nos. 6 and 17, are favored to take Jones. Even if you don’t agree that the Giants should take Jones, it’s not difficult to understand why many believe Jones could be their target as they try to identify Eli Manning‘s successor a year after passing on Sam Darnold.

There’s the Manning comparison, and while Manning never played for the Giants, his brother Eli has played for them since 2004. Jones played collegiately at Duke for David Cutcliffe, who developed both Manning brothers in college. The Giants, according to ESPN’s Jordan Schultz, hosted Jones for a private visit and already held a private workout for him. There was Robinson’s report about one team having Jones at the top of their quarterback board and the strong hint that the team in question was the Giants. And there was Jeremiah’s mock draft that has Jones going to the Giants at No. 6.

None of this, of course, guarantees the Giants will take Jones. Maybe the Raiders, who pick at Nos. 24 and 27 in addition to No. 4, will take him. For all we know, Jones will fall out of the first round. The Giants are likely the team that has Jones ranked at the top of their quarterback board, but that doesn’t mean they have to take a quarterback in the first round — or at all. They might decide to focus their draft on building infrastructure around the quarterback position and then take a quarterback in next year’s draft. They might trade for Josh Rosen.

The point being, nobody really knows anything. But with only four days remaining until the draft begins on Thursday, our wait is nearly over. We’ll find out soon enough how far Jones has actually risen.