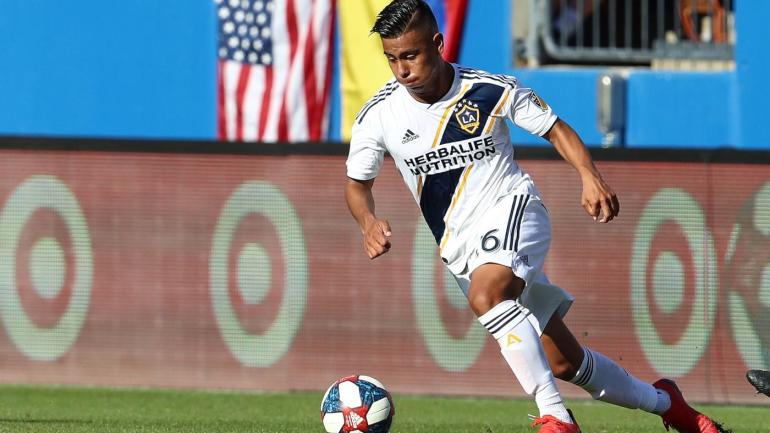 This is a golden era for soccer in the United States when it comes to producing top talent. The fact that Christian Pulisic was sold to Chelsea for $73.1 million shows that times are changing when it comes to the young talent this country can produce for high-end European clubs. Gregg Berhalter, coach of the U.S. men’s national team, has quite the pool available to him, and the pipeline of the youth national team is currently flourishing, which raises the hopes for a brighter future and moves the Americans further away from the debacle that was the 2018 World Cup qualifying cycle.

There is also another name out there — a player that once represented the U.S. in the youth system but recently flipped to Mexico.

Efrain Alvarez, the Los Angeles Galaxy’s 16-year-old star midfielder, is engaged in a bit of a tug-of-war between the U.S. and Mexico. Alvarez is a rising star who was born in Los Angeles to Mexican parents, and he’s represented both national teams at the youth level.

Here’s an update on his situation, what each side is thinking and much more.

It’s worth noting that Alvarez was the captain of the United States U-15 team in 2016. Mike Muñoz, his club coach at the time, tried to explain Alvarez’s reason for flipping, via Soccer America.

With U.S. Soccer, Efra was dropped from the camp for whatever reason. I don’t know if there was a collective decision from U.S. Soccer. … Unfortunately when he was dropped, Mexico came knocking at the door and he has been there ever since.

U.S. Soccer would not comment specifically on the situation when reached for comment this week. A source told CBS Sports that there were a “couple of incidents” in a short span of time while he was on the U-15 team but would not go into detail out of respect to Alvarez, adding that there is currently no tension or animosity between Alvarez and USSF. Another source told CBS Sports that the issues were in relation to him being benched.

Since then, plenty has changed for Mexico and the U.S. Here’s what you need to know about the player, his situation and more:

He’s comfortable as a false nine or as a true No 10. Technically, the best I have seen at his age at that position. Creates for others with a great sense of field awareness, taking advantage of space around him. His composure as the primary play-maker in the attacking third is special. He has assertive flair on the ball, makes him different than most others. He is also an extremely clinical finisher. Twelve goals in 18 games for LA Galaxy II, and he scored the winner vs. Chile for Mexico U-17. His transition defense needs to improve but I have no doubt that Efra is already one of the most unique and highly-skilled players to come out of the USA.

When you see him on the field, he’s a natural. He made his debut with the Galaxy senior team on March 2, and it went really well. He grabbed a fantastic assist in a 2-1 win over the Chicago Fire.

He was also key in the second goal with this nifty little pass that resulted in a shot on frame and then Zlatan Ibrahimovic’s winner:

It’s easy to see why both federations want him. Mexico has him, but the U.S. isn’t giving up hope. He has yet to debut for either national team, and until he does, he is still eligible to switch back to the U.S. on the senior level or stay with Mexico.

Here’s the latest from each side.

Meeting with Martino, Mexico is ‘on top of him’

Mexico has to feel really good where things stand. A source told CBS Sports that Alvarez met with Mexico national team coach Tata Martino last week in Mexico City and that conversations went well. There have been some rumblings — like this from retired USMNT player Herculez Gomez — about him being called up for the Gold Cup (stream via fuboTV) which would cap-tie him to the Mexican national team. It early, but it still is possible.

A source close to the player said simply, “Mexico is on top of him,” and added that there is still some time for the United States to approach him, though there appears to be more commitment from Alvarez and his family with Mexico.

If he were to play for the Mexico national team in an official competition, like, say the Gold Cup, then he would be cap-tied to the federation, making him ineligible to play for the United States in the future. A spot on the senior team in an international friendly would still leave the door open for a change of heart.

What’s the latest from the U.S. side?

U.S. Soccer has been in contact with him in the past after he switched federations, and the door is open, a source said.

I’ve been told the dialog between the U.S. and Alvarez have resulted in “excellent conversation.” One source said that Alvarez and his family are happy with where they are, they know the U.S. wants him and he is keeping all of his options open.

But it doesn’t seem like there has been contact between Alvarez and new USMNT coach Gregg Berhalter, and if there hasn’t been, it’s not anything that Berhalter has done wrong. He has to get his team back on track, and you have to imagine he has had Alvarez on his mind from time to time. Berhalter is interested and keeping an eye on him. He was at Los Angeles Galaxy training last week and spoke about Alvarez, CBS Sports has learned.

“He’s following him closely. He likes his talent, but he is also very young,” one source said about Berhalter on Alvarez.

Where does his family stand?

His parents are from Mexico, and they love life in the United States. They feel a sense of loyalty and love for both countries, and who knows at the end of the day what will happen. It would be silly for the U.S. not to make a push, and Mexico will do what it can to get him to stay. But if his family gets a large part of the say, it certainly feels like he could be the next big thing for El Tri and a missed opportunity for the U.S.

“His father and mother are also very proud of their son being with Mexico,” one source said. “He likes it there.”