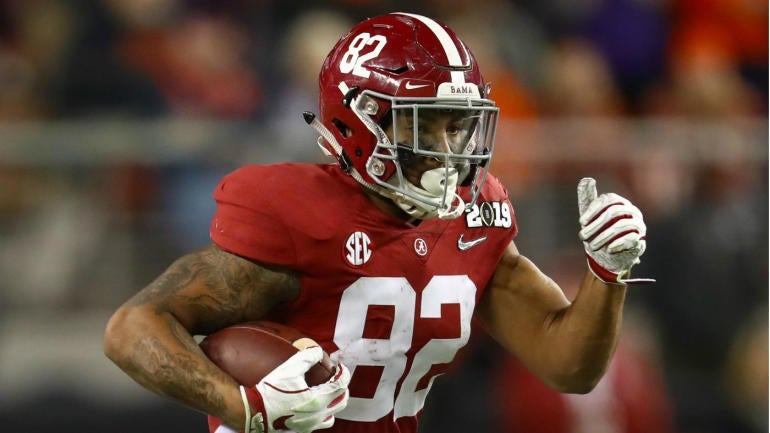 In most years, there are about 20-24 players in a draft who represent a safe bet to be first-round picks. The exact number can certainly vary by the year, but you can usually identify 75 percent of the players who will eventually comprise the top 32 picks.

Trades and surprises are always a factor, and you allow for that wiggle room by leaving space for 8-10 players in this process. But there tends to be a consensus of sorts by about a week before the draft as to a few dozen players who seem destined for the first round, barring a last-minute injury, arrest, legal problem, or video or social media posts emerging of the player saying or doing things that could cause his stock to plummet.

This year there are 24 individuals I feel like are targeted for the first round. You may notice this list is light on defensive backs and receivers. I fully expect more of them to go in the first round than what I have listed here, but there is so much difference in opinion as to their value and merits that it’s very hard to pinpoint specific players in a specific spot once we get into the 20s and 30s. There will definitely be additional offensive linemen selected who are not listed here, as well, and there is often a run on them late in the first round.

Here are the 24 prospects I see as first-round locks, or close to it:

The entire league believes he is the first-overall pick. ‘Nuff said.

He is being mocked second overall to the 49ers in most spots for good reason.

The pass rusher is going in the top five, probably either right before or right after the next guy on this list …

A stud defensive tackle like this doesn’t wait long to hear his name called.

He is either the top linebacker in this draft, or, depending on whom you talk to, this guy is …

It’s only a matter of time for him, as well. Impossible to envision a scenario that does not include him going in the first round.

The top tackle in the draft is going within the top dozen picks, just a matter of which team at which point.

Whether or not he remains a tackle or kicks inside, it doesn’t really matter at this point. He is a definite first-round pick.

A lot of people have him pegged to the Jags in the top 10, and for good reason. This trio of offensive linemen will be off the board in fairly rapid succession, I suspect.

Another wave of a run on pass rushers will begin outside of the top five, and it may well start with him. Ditto for some of his Clemson teammates from that side of the ball like …

After Williams and Oliver, he is the next most coveted defensive tackle. Too much power, speed and dexterity to ignore.

He rounds out the Clemson crew and his massive frame has been NFL-ready for years.

The pass rusher from Florida State is generating a lot of buzz based on his upside and ability to close on the QB.

Hearing he may not go quite as high as some project, but it’s hard to imagine him getting outside the top half of the first round.

He is not everyone’s cup of tea and I am far from convinced he goes in the top dozen picks, but if he does slide it won’t be beyond the 20s.

Haskins may slip a bit, but the kid had boundless pocket potential and threw for over 50 TDs in a top conference. He isn’t getting past the 15th or 16th pick.

Coming into focus as the top tight end in the draft and this is an elite group. If he comes off the board in the top eight picks or so, then the run on these other guys may start faster than at this point in the middle of the round.

Maybe he gets out of the teens before he’s picked, but maybe not. Seen as a safe, clean pick no matter where he goes.

Some people are not convinced all three of these tight ends go in the first round, but I am. I have a very hard time seeing teams like Green Bay and New England, with such an obvious need in a win-now draft, passing him by and letting him get to Day Two.

I believe the Oklahoma speedster, even coming off injury, is the safest bet of this confounding wide receiver class to go on Thursday. Maybe it is after D.K. Metcalf, but I felt most comfortable putting one WR in this group of 24 players, and that’s Brown.

Teams will be content to wait until Day Two, by and large, to grab a RB. But I can’t see Jacobs getting past the Eagles, Ravens and Raiders later in the first round.

Can’t fathom Simmons isn’t selected in this round, even if it is slightly after that run on the top three defensive tackles.

Centers are getting much more money and attention now in free agency, and it’s hardly taboo to take them in the first round. If I had to select an OL outside of the big thee (Williams, Taylor and Dillard) to be the safest bet to go in the top 32, I’m leaning to Bradbury. Maybe someone like Cody Ford, Kaleb McGary or Dalton Risner even go before him, but with things so murky at the back end of this round I’m making Bradbury the fourth OL of my 24 players here

There are going to be at least three QBs selected in the first round, and I can’t imagine he isn’t one of them. Maybe four go and he falls behind Daniel Jones. That wouldn’t be a shock to me. But ultimately, I can’t see him getting past the teens and he could go top 10 to Denver.

So that’s the 24. If you made me expand this list, Metcalf and corners Greedy Williams and Byron Murphy would likely be my next guys up. Basically, this exercise serves to kind of cluster players together and mimic the ebbs and flows I believe the first round might take. And as I play it out, these were the 24 players I had the hardest time leaving out of a top 32.