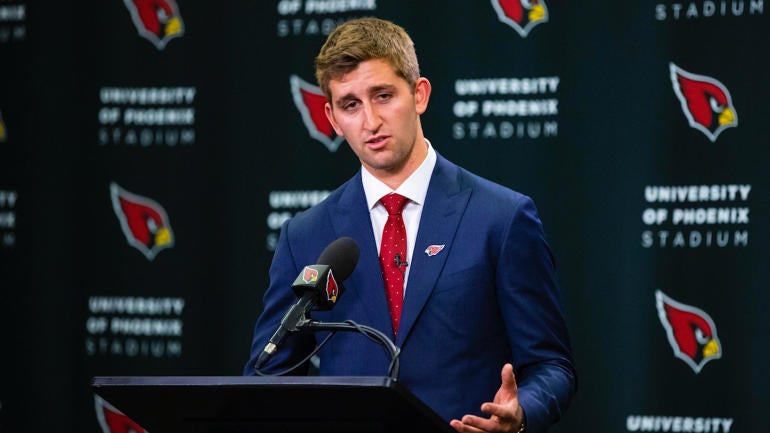 With just one week to go until the NFL Draft, one of the biggest mysteries in football is whether or not the Cardinals are going to keep Josh Rosen.

Although general manager Steve Keim insists that the Cardinals still haven’t decided what they’re going to do with the No. 1 overall pick, there’s been plenty of speculation suggesting that the Cards are planning to draft Kyler Murray and dump Rosen just one year after landing him with the 10th overall pick in the 2018 draft.

The Cardinals added to that speculation on Wednesday when they made the very conspicuous decision to keep Rosen out of their schedule-release video.

As the Murray buzz continues to build, one person who has been noticeably silent about the possibility that Rosen might be traded out of Arizona is Rosen himself. Although the Cardinals kicked off their offseason workout program on April 8 — with Rosen in attendance — the quarterback is one of the few players who still hasn’t been made available to the media.

With exactly seven days to go until the draft, Rosen finally broke his silence this week, and as you can imagine, he doesn’t sound too thrilled about what’s going on. In an exclusive interview with Sports Illustrated, Rosen referred to his current situation as “annoying.”

“I think when people talk about, ‘You can’t listen to criticism or don’t ever read articles,’ you have to be aware of what’s going on to a certain extent, so I definitely understand the situation,” Rosen said. “I mean, it’s annoying, but, it is what it is. Football is a business and I definitely respect the higher ups and their decisions.”

Although Rosen willingly admits that he struggled on the field last season, he’s still itching to get back on the field and compete — whether or not that’s with the Cardinals is another question.

“I think the season probably went as poorly as it could possibly go, but within that, I had an unbelievable time,” Rosen said. “We won three games and each one of those wins, to me, it felt like we won the Super Bowl and that feeling is so intoxicating and that’s why I want nothing more than to be a part of a team next year and have the same opportunities to go out and compete.”

If the Cardinals do end up trading him away, it sounds like Rosen plans to make them pay. The quarterback said he’s going to “prove them wrong” if they end up dealing him.

“I think the best advice I’ve ever gotten in life from so many different people is ‘control what you can control,’ and whatever decisions are made, it’s my duty to prove them right if they keep me and prove them wrong if they ship me off,” Rosen said.

So what’s going to happen in the draft?

Six of our writers here at CBSSports.com took a stab at the question in their latest mock drafts. Although three of those writers have Murray landing with the Cardinals, we have three other writers who have Murray going to another team. To check out each of those mock drafts, all you have to do is click here.