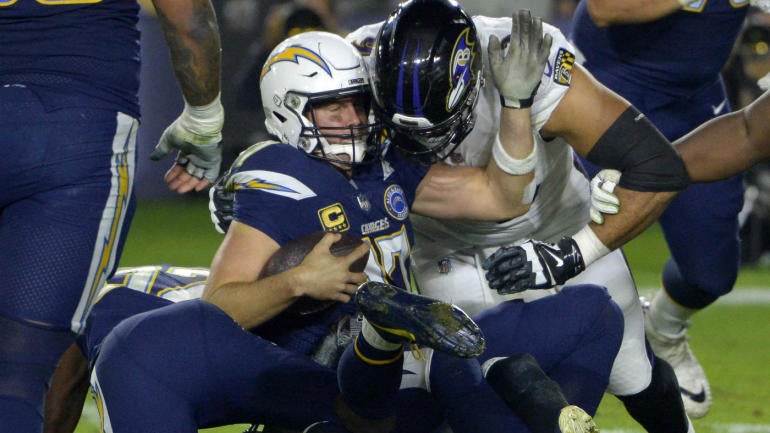 It is, as they say, go time. The playoffs are here and the wild-card round features seven new teams. The only familiar face: the defending Super Bowl champion Eagles. It all started Saturday with the Colts beating the Texans and and the Cowboys shutting down the Seahawks. Sunday, Chargers-Ravens kicks off at 1:05 p.m., and Eagles-Bears wraps things up at 4:40 p.m. ET.

Stream Sunday’s playoff games on fuboTV, try it for free, and stream the CBS games on CBS All Access.

Alright, let’s get to all the games below.

Start a playoff picks pool today to compete against friends and coworkers or show off your football knowledge by playing against experts.

The Ravens were both thorough and clinical in their dismantling of the Chargers — in Carson, California, no less — two weeks ago. Yes, if Antonio Gates hadn’t fumbled late in the game the outcome might have been different. But he did fumble — in part because the Ravens’ defense is very, very good — Baltimore turned it into points, and L.A. was helpless to do anything about it.

The good news is that Philip Rivers can be a one-man wrecking crew. We’ve seen it countless times over his 15 NFL seasons. He looks like a sitting duck, slow and plodding, but it’s all a ruse; he delivers the ball quicker than just about any other quarterback, and it’s almost always with uncanny accuracy. We say “almost” because on the first play of that Ravens game, Rivers went deep … and he was intercepted. It was great play by cornerback Brandon Carr, but he’s not this unit’s best player, or even its best cornerback. In fact, Rivers’ biggest concern is Baltimore’s pass rush, which spent the evening in his face. He wasn’t allowed to get comfortable in the pocket, which meant Keenan Allen couldn’t get going.

But what about Melvin Gordon, you might ask. Don’t, because the Ravens aren’t into that either. He had 41 yards on 12 carries in Week 16 and there’s no reason to think that’ll magically change.

The Chargers’ defense is legit too but it eventually caved under the weight of the Ravens’ running game. That will again be a storyline we know what rookie Lamar Jackson will do: RPOs out the wazoo, Gus Edwards up the gut, and the occasional pass play, probably a slant and almost certainly between the hashes. But that’s the beauty of it — everybody knows what’s coming but they’re helpless to do anything about it!

There’s an argument that Jackson will be at a disadvantage because the Chargers have already seen him this season. Two counterarguments: Yeah, and they couldn’t stop him. And the Ravens saw Rivers too. All that, coupled with the Chargers having to fly across the country for what will be a 10 a.m. game, will make it incredibly difficult for them to pull this off.

Please do not bother Nick Foles in September. For him, that’s still the offseason. But if an emergency comes up in December or January, then by all means. Foles is again filling in for an injured Carson Wentz, and he’s again playing like a first-ballot Hall of Famer. But for all his success in big games — and, as a reminder, he’s the reigning Super Bowl MVP — he’s never faced a defense like this Bears‘ unit.

So then the question becomes: Can Foles, who has back-to-back games with a passer rating of 102.1 or better, can continue apace in the playoffs. The short answer is yes. Foles was surgical against the Vikings in NFC Championship Game a year ago and Minnesota had the league’s No. 2 defense. All Foles did was go 26 of 33 for 352 yards with 3 touchdowns and no turnovers.

But for as good as that Vikings’ defense was, they’re not the Bears, who are consistently dominant. It starts with Khalil Mack, obviously, and perhaps the biggest concern is safety Eddie Jackson, who has six interceptions this year but it battling an ankle injury.

On the other side of the ball, first-year coach Matt Nagy’s biggest task will be keeping quarterback Mitchell Trubisky comfortable. We know the moment isn’t too big for Foles, but this is Trubisky’s first playoff game. He’ll need to complete easy throws early to get into a rhythm and then lean on Tarik Cohen in the running game. Exacerbating matters: Allen Robinson, Taylor Gabriel and Anthony MIller are listed as questionable. The Bears’ 20th-ranked offense can’t afford to be without their three wide receivers.

Three months ago, both these teams were 1-3. Now, days into the new year, they’ve combined to go 19-5 since. But the Colts and Texans have taken different paths to this point; both feature very good defenses but Indianapolis’ offense is built on balance and protecting Andrew Luck, while Houston is more of a fly-by-the-seat-of-your-pants approach to matriculating the ball down the field.

Put another way: Andrew Luck, who was sacked 41 times in 2016 (he missed 2017 with an injury), has gone down just 18 times this season. He was sacked twice in the last three regular-season games and enjoyed a five-game stretch in Weeks 6-11 where he wasn’t sacked at all. Deshaun Watson, meanwhile, has endured a whopping 62 sacks this season. SIXTY-TWO! By comparison, he went down 16 times in the last three games, and oh-by-the-way, in the two previous matchups with the Colts, Watson was sacked 12 times.

That is unsustainable in the long term, and for now, it could prove to be the difference between advancing to the divisional round and heading for the couch.

Both defenses are stout against the run and below replacement level against the pass. Which means the quarterbacks will likely have to win with their arms. And for Watson that includes the hurries, hits and, ultimately, sacks that come with it.

What NFL picks can you make with confidence during the Wild Card Round? And which top Super Bowl contender goes down hard? Visit SportsLine to see which NFL teams are winning more than 50 percent of simulations, all from the model that has beaten 98 percent of experts over the past two years.

Remember back in Week 11 when the Chiefs and Rams combined for 105 points and we all thought that was what this new high-flyin’, pass-happy NFL was going to look like for the next decade? It didn’t last a month. Instead, the running game is the league’s version of the hipster coffee shop; it’s suddenly ubiquitous. Both the Seahawks and Cowboys have made their livings pounding the rock, though in different ways.

But for all their similarities, there are differences, too. Seattle’s offense ranks ninth overall, according to Football Outsiders’ metrics (sixth in passing, seventh in rushing) while the Cowboys are a distant 24th (26th in passing, 19th in rushing). A big reason for the disparity? Russell Wilson is ninth in value per play among all quarterbacks while Dak Prescott is 26th, behind Nick Mullens.

On the other side of the ball, the Cowboys’ defense has been lights-out this season, and it starts with Demarcus Lawrence up front (10.5 sacks), Jaylon Smith and Leighton Vander Esch at linebacker, and Byron Jones in the secondary. And if Dallas is going to slow down Seattle’s methodical, steady-as-she-goes, clock-consuming offense, it will be because its defense consistently gets off the field.

Perhaps most importantly, coach Jason Garrett can’t turtle up in big moments. He’s one of the league’s most aggressive coaches when the games don’t matter but takes a more conservative approach when they do. That, more than anything, could prove to be the difference.