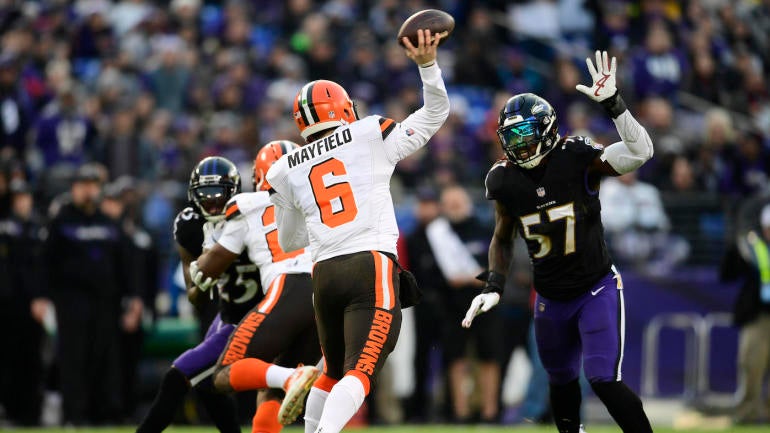 NFL Week 17 is here. To keep tabs on some of the choicest highlights and other big news throughout Sunday, keep it locked here for updates.

(Stream all of Sunday’s games on fuboTV, try it for free, and stream the CBS games on CBS All Access.)

One year after having their hearts stomped on by the Cincinnati Bengals in Week 17, the Ravens found a better fate on Sunday. Baltimore managed to clinch the AFC North (and a playoff spot) with a win over the Browns, but it came down to the wire. It was a dramatic game-sealing interception by C.J. Mosley that got the job done.

Those are the three guys who have now thrown for 26 touchdown passes in their rookie season. The Browns quarterback reached the mark on Sunday with this touchdown toss to Jarvis Landry.

Then, Baker took the record all for his own with his 27th touchdown pass, caught by Antonio Callaway. Not bad for a guy who spent the first few games of the season on the bench.

Patrick Mahomes hit the 50-touchdown mark on Sunday, putting an incredible exclamation point on what’s been an MVP-worthy season from the Chiefs’ quarterback in his first year as starter. Mahomes’ 50th TD went for 89 yards, because what else did you expect? He now joins Peyton Manning and Tom Brady as the only quarterbacks to hit the single-season mark.

Alshon fights for it

Alshon Jeffery showed great hands, will and strength to come away with this touchdown catch despite great coverage by Josh Norman.

Larry Fitzgerald is closing out yet another season in Arizona, and he’s doing so in pretty fine fashion. This one-handed catch was pretty smooth.

The Ravens need a win against the Browns to secure their playoff spot and Lamar Jackson is doing all he can to make sure they get it. The Baltimore quarterback is doing some serious damage on the ground in the first half, running for two early touchdowns against Cleveland.

Patrick Mahomes picked up his 49th touchdown pass of the year early in Sunday’s matchup against the Raiders. Mahomes found Ty Hill for a 67-yard touchdown in the first quarter.

Cole Beasley came up with a massive fourth-down catch for the Cowboys at the end of their contest against the Giants. The grab, which was originally ruled incomplete before being overturned, helped Dallas beat New York for a big win to close out the season.

The Giants’ Cody Latimer submitted a late candidate for best catch of the year with this touchdown grab in Jersey on Sunday. A one-handed beauty worth appreciating.

But he wasn’t done there. Latimer made ANOTHER insane one-handed grab later in the game, and this one may have been even better than the first.

Saquon Barkley has had an incredible rookie season with the Giants and he’s finishing it off by hitting a couple of impressive milestones. Not only did he surpass 2,000 yards from scrimmage, but he also set a new rookie RB record for most catches in a season with his 89th grab.

Things aren’t going so hot for the Saints against the Panthers in Week 17. But, on the bright side, we did get to see the first passing touchdown of the season for Teddy Bridgewater, who got the start behind center against Carolina.

Dak Prescott has three passing touchdowns against the Giants on Sunday, and all three of them have gone to tight end Blake Jarwin.

It’s Week 17 so why not get crazy? We have two quarterbacks with receiving touchdowns already this week — Matt Ryan from Mohamed Sanu, and Ryan Tannehill from Kenny Stills.

What a pitch and catch to Chris Godwin here. Right on the money.

It seems only fitting that former punter (and big-time kicker showmanship advocate) Pat McAfee was on the call for this touchdown pass from Lions kicker Matt Prater on Sunday.

Brady off to a hot start

The Patriots need a win to lock up the AFC’s No. 2 seed today and Tom Brady came to play early on. He’s got three passing touchdowns in the first half, including these beauties to Rex Burkhead and Phillip Dorsett.

Saquon on the loose

The Giants’ rookie running back is making the most of his openings early against Dallas.